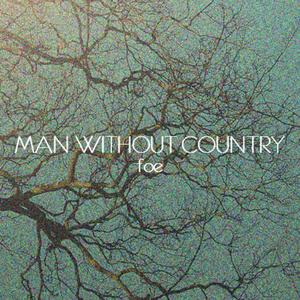 For most people the bedroom is a place to sleep and generally unwind. For Tomas Greenhalf of ‘Man Without Country’, however, the bedroom is the perfect place to produce an album. ‘Foe’, the debut album of the Welsh duo that comprises Tomas along with Ryan James, was produced entirely in the bedroom of Greenhalf, although this is impossible to tell, considering the crispness and completeness of their compilation.

From the very opening track, the eeriness and heavy use of synth that defines this album makes itself heard. And this eeriness is something that features throughout ‘Foe’; we are constantly made to feel uneasy. ‘King Complex’, for instance, is full of choir-like harmonies and abundant underlying synth which forms a huge, uplifting wall of sound. But the vocals don’t seem to match the elation of the music at all, with phrases such as ‘you were the bearer of bad news’ putting a bit of a downer on the cheerful chords of the backing synth.

There’s a sense throughout the album that, despite the uplifting nature of the music, shown in the upbeat arpeggiated synth of ‘Puppets’, for instance, there is always this underlying bitterness and eeriness than can never be completely ignored. Many of the lyrics, such as ‘your last words will be written on your tombstone’ give quite a eerie feel to the album’s tracks, and this eeriness reaches its inevitable crescendo in the form of ‘Migrating Clay Pigeon’, a song which combines distorted vocals with a booming bass to create a very dark and rather scary effect. In fact, if ‘Migrating Clay Pigeon’ never ends up featuring in a horror film, then directors are missing out.

Overall this isn’t really an album that can be pigeonholed. There are moments where the music wouldn’t feel out of place in a nightclub, such as parts of ‘Puppets’, but there are also moments that feel as if they could have been taken straight out of a Radiohead album, such as the end of ‘Inflammable Heart’. In an album where so much is going on, from pounding bass, to rippling guitar riffs, to hip-hop drumming, it’s impossible to take in everything in just one sitting. With ‘Foe’, the Welsh duo have created something that, just like all good films, offers something new each time around, and for this reason deserves at least one listen.

SUBA STAGE ON EXIT: AV SHOW BOEMKLATSCH RECORDS, THE TASTE OF THE RUSSIAN UNDERGROUND AND THE VERY BEST OF KC GRAD