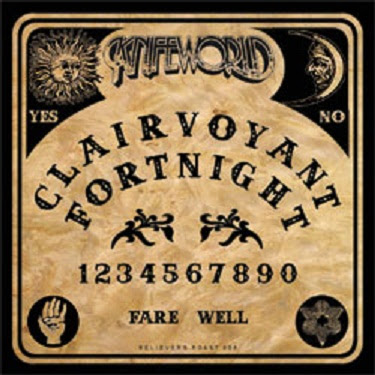 Chaotic and pleasantly odd, this EP from Knifeworld isn’t exactly the definition of polished songwriting, but its originality and eccentricity does at least have a certain charm. Opening track Clairvoyant Fortnight is indicative of the messy sound the band goes for, and has some fun moments. However, it’s all over the place and lacks finesse or structure – it’s a case of throwing everything up against the wall and seeing what sticks. Some of it does, but a lot doesn’t, and after a few minutes the song starts to grate. In a Foreign Way is more of the same, which is a shame as again there are some nice moments. The band needs to learn to settle on one idea and develop it into a song, rather than just endlessly coming up with new ideas that bear little relation to one another. The amusingly titled The Prime of Our Decline has a pleasingly jerky syncopated beat to it, some great jazzy dissonance and an intriguing, constantly changing soundscape. Unfortunately, this doesn’t really go anywhere, and once again things get messy. Nethertheless, I enjoy the Syd Barrett-esque aimlessness and harmonic variety of it all.

In Remission – The Great and Shallow EP

Reverend and the Makers – The Wrestler