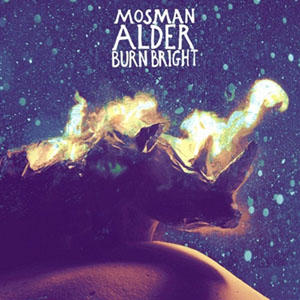 First it was post-hardcore. I’d become used to having some bunch of Essex boys with a Reuben fixation show up in my email inbox every Monday or Tuesday, waiting to have my critical eye cast on their first, fleeting steps into the world of pop music. I had a handle on that, I could deal with it, but Jesus river-dancing Christ it got old. It got to the point where I was so tired of hearing serrated riffage breaking into a huge melodic chorus that I would negatively review whatever it was I was listening to just because of sheer overexposure. Recently though, there’s been something of a change. The offending genre has now become happy-go-lucky, inoffensive indie-folk (even the genre name gives me a shudder). A perfectly decent record, like the one we have here, the debut E.P from Australian six-piece Mosman Alder, can get an unfavourable review, like the one you’re reading now, just through its resemblance to many other things I’ve listened to in the past. So I’ve let the cat out the bag by now I suppose, I don’t like this record, and the reason that I don’t like it could be considered questionable, but should it?
Yes, this is perfectly serviceable indie flavoured folk. With melodies coming from Violins, Flutes and Pianos, the one’s coming from opening track Jasmine are especially delectable, and Mr Pinckney and the Beast shows that they can still succeed when they turn up the thermostat and get as close as they ever will to rocking out. This issue here is precisely that, it’s… alright. It’s not bad. Passable. And for someone who doesn’t have to listen to it, that’s fine, they can listen to as much as they want, then turn off. Not so for the poor critic. But here, the only thing that leans toward setting Mosman Alder apart from the pack is singer Valdis Valodze’s spectacularly hammy baritone, and that’s not a good thing. Otherwise, listening to this will have just as much impact on your life as not listening to it, and for the sake of pop music in general, we have to ask of more.