Andre LaFosse – The Hard Bargain / Do The Math 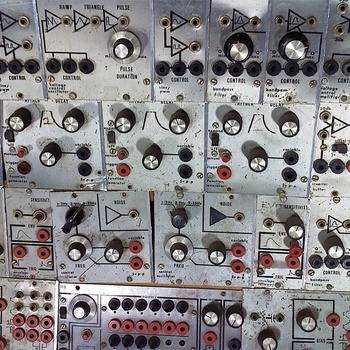 In the wake of the perennial burgeoning (though unfairly overlooked) wave of ever-widening mitotic sub-divisions in the indie rock genre vying for validation, it seems all too easy for artists to wear their self-supposed sanctimoniousness as a badge of honour. Not Andre LaFosse, it seems. His collection of ‘mid-life crisis rock’ in The Hard Bargain are, for an entirely instrumental album, refreshingly accessible. From the outset, LaFosse eschews the esoteric pomp of his avant-garde roots, with the punchy, pounding riff of Subway Psychology rolling right on in and unashamedly claiming your attention, daring you not to nod your head or tap your feet. Dragged through the crushingly apocalyptic grunge of Twelve Sided Dice into the ethereal mist of the titular track, the listener is often coaxed into zoning out in the crossfire, but resistance will bear rich rewards in subtle sprawling wave layers and viciously evolving form, serving as a championing indictment to the album’s extended track lengths. Shades of the avant-garde are to be found in the haunting dejection of Zen Gun, rising from beautifully smooth melody lines to overwhelming, head-crushing static dissonance. The melodic quiver of Remediation carries you through to the closing swan-song quagmire of Balancing Act, which, while impressive and beautifully crafted expansive pieces, do leave you wondering quite where the punch of the album has gone off to.
Though it never quite recaptures the energetic burst of the first track, the album serves as LaFosse’s exploration of the limitless breadth of his guitar’s buzzy growl and heavenly evocative choral wail. Not a full-circle affair, the album traverses vast music ground with the simple guitar-bass-drums format, leaving you in a very different state to that which it found you in, for better or worse.

If The Hard Bargain is that quirky uncle whose maladroitness only serves to endear you to his oozing vintage cool, then Do The Math is the full-blown lunatic, annexed and extradited from your family gatherings. A work bursting at the seams with oftentimes terrifying dynamism, the album is quite the far cry from LaFosse’s other 2012 offering (Though if you’re looking for more of his sickly-sweet guitar lines, those are still to be found pervading the ultramodern synthesizer maelstroms).
The album opens in stellar fashion; the first track Retcon pulsing slowly into life with beautifully rudimentary hum, blended with taut yet moving guitar-fire leitmotifs. LaFosse’s skill and musicality are showcased here wonderfully; his physical and theoretical control of melody throughout the track as it escalates to increasing levels of synthetic angelic buzz set the underlying tone of the album well. Semblance of Terra Firma is henceforth annihilated however, with the heralding of Hard Sci Fi; the subtle and restrained control of the previous track is obliterated in a distorted sonic onslaught, as fuzzed out guitars trade blows with a chorus of wayward 56k modems. The concurrent tracks follow suit, crafting sonic ravines of wonderfully chaotic synth with LaFosse’s signature guitar lines, before affording you a return to a less frantic, albeit increasingly overwhelming, experiment in subtlety in The Process of Elimination. The extraterrestrial space war of Slow Motion Saturation follows, leading the way into some of the most dissonant and experimental work in Strange Games. The closing tracks of the album present brilliantly fuzzed out, digitized guitar alongside discordant industrial rhythms in Basilisk, before the epic curtain fall of the ever-mutating formal masterclass medley in Siren Song/Yawning Abyss/The Turing Test, bringing the album to a fantastic all-encompassing conclusion in a final mitigating blowout, determined to knock loose any residual scepticism from lingering non-believers.
While from time to time the album does get carried away, it is always volatile with buzzing energy, never becoming inertial even in its calmer moments. It is difficult to ignore the fact that the sheer synthetic bedlam of the work can oftentimes become overwhelming, as the fusion of melody and electronic pulse is compromised in favour of experimentation. Yet, across the 10 tracks, there is enough of a firm grounding with LaFosse sticking to his guns; the best moments of the album reveal themselves in the seamless synergy of the artificial and the organic. LaFosse’s masterful use of guitar in various distorted and unmolested guises throughout the work, in tandem with, rather than in conflict with, pounding robotic fury form a thoroughly enjoyable, solid offering with more than enough room for the odd alienating experimental detour for flavour.