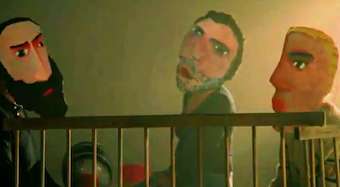 It has been quite the a for Dirty Three, after nearly 8 long years the trio of Warren Ellis, Mick Turner & Jim White returned with a new album Toward The Low Sun… Critical acclaim, sold-out shows and headlining festival appearances ensued and now we are very happy to share with you the first video from this album for the song ‘Rising Below’.

Directed by Emma Watts, the video takes inspiration from the cover art of Toward The Low Sun and features duelling knights, dragons and some medieval dancing!

Dirty Three will be touring throughout the UK in November: