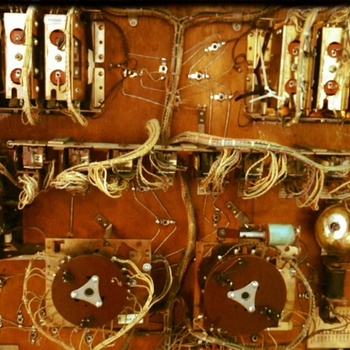 Gowith are an avant-acoustic drone duo consisting of Jeff Mc Leod and Marshall Marrotte. “Burst Into Dust” is their first album together and was recorded completely live and improvised. The result is a 9 track album that dabbles with various different styles and sounds.
The duo blend the sounds of their acoustic guitars with other instruments and noises but keep the overall volume low and understated. Many of the tracks including “Now It’s Dork” and “Miles of Whispering” are quite mellow. However the duo also give upbeat a try on tracks such as “For Pay You What Get You” and title track “Bust Into Dust” where they bring the tempo up a bit. The songs on this album are not centred around lyrics, choruses or even any particular melody. Rather, “Burst Into Dust” focuses on blending different instruments and sounds into one another- this album is really more about a fusion of sounds and an experiment of styles.

Jeff Mc Leod – Under Dim Self