Coco and the Butterfields have been crowned as the best unsigned act of 2012 after winning Live and Unsigned in front of a sell-out audience at The O2 on Saturday.

The band Coco and the Butterfields from Canterbury have taken away £10,000 to develop their music and an incredible 18 date summer festival tour including a trip to Tour Fest in Rome. They were crowned Live and Unsigned champion at Proud2 within The O2 on Saturday night, describing the victory as ‘Brilliant, it hasn’t really sunk in yet. We’ve got so much out of the competition. In each round we’ve won something, now we’ve won the whole thing, it’s amazing’! 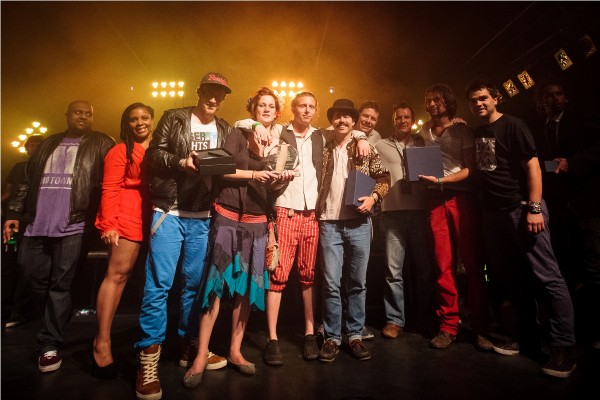 The band won festival slots at Beach Break Live and Paddle Round the Pier in the earlier rounds of the competition. They also bagged a vintage guitar and a Blackstar amp before they even got to The O2 for the Grand Final.

Coco and the Butterfields first won the Indie & Alternative Grand Final with their genre crossing brand of ‘Fip Fok’ (a combination of Hip-Hop, Folk and Pop) on Saturday night before being announced as the overall Live and Unsigned 2012 Champion, having their prize presented to them by Radio One DJ Ras Kwame, who was judging the event.

Coco and the Butterfields beat more than 10,000 other acts to eventually win the biggest competition for original performers in the UK. As well as winning £10,000 to spend on development they will receive £10,000 worth of publicity investment, and an animated music video worth £10,000 courtesy of Gavdude. Also winning prizes through Live and Unsigned were Contraband who won the Rock & Metal Final, Leon Bratt who was crowed best acoustic act, and Molly who won the Urban/Pop category.

Further festival slots were given out on the day as well as a Fret King Guitar endorsement, a Natal drum kit and Blackstar and TC Electronic amps.

Chris Grayston, Events Director of Live & Unsigned commented: “this is a fantastic achievement for Coco and the Butterfields.  They’re definitely the most original winner we’ve ever had. They beat a massive pool of talent on the day to take the £10,000 which they can spend on development as they like. They festival tour will be an incredible experience for them too and a great way of getting their name out there even further!”

Live and Unsigned is the biggest original music competition in the UK for unsigned bands and artists. Attracting over 40,000 musicians to enter this year, it has set itself apart from its predecessors by promoting originality. To secure your audition place for next year’s competition, go to www.liveandunsigned.uk.com