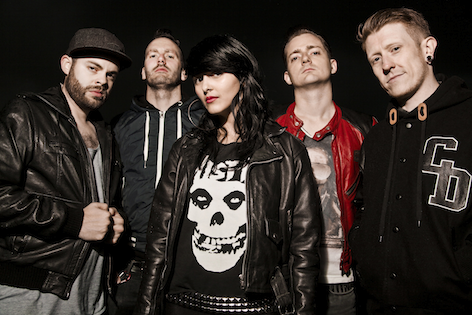 – Band sign to Xtra Mile Recordings, home to Frank Turner, Future Of The Left, Against Me!, Fighting With Wire and The Xcerts

– Have already had a summer of shows and festivals including The Great Escape, 2000 Trees, headline HMV Next Big Thing show and Redfest

– Album track 1, and last year’s single, ‘For The Kids Of The Multiculture’ video  http://www.youtube.com/watch?v=qS3oriHCZbk&feature=youtu.be

Manchester’s SONIC BOOM SIX can now FINALLY announce the release of the superb, game changing, perception challenging, new, self titled album, ‘Sonic Boom Six’, for their brand new label, Xtra Mile Recordings, on October 15th. The band can also announce a month long (almost) November headline tour, starting on November the 2nd in Nottingham and ending on November 24th in Newport, AND the forthcoming single from the album will be ‘Virus’, being released September 17th.

Laila K, vocalist and front woman from SB6, on both the new album and signing to Xtra Mile Recordings; “Not only is ‘Sonic Boom Six’ like the start of a new day for SB6, but I truly believe it’s the best record we’ve ever made. The whole purpose of the album was to get our ethos and message out in a way that is inclusive and inviting to everyday people. We don’t want to be preaching to the converted any more, we actually want to change minds and viewpoints, not confirm what people already know. I think that’s exactly why we’re so excited about working with Xtra Mile. Not only are some of our favorite artists on there but they’ve actually proven with Frank Turner that they can make an artist accessible and popular within the public eye while retaining the core message and philosophy that the artist came into the industry with. That’s something that is vital to us, so it’s a perfect fit!”

Produced and mixed by Peter Miles (Futures, We Are The Ocean, The King Blues), ‘Sonic Boom Six’ builds on the band’s previous reputation for progressive, genre-hopping punk rock, by adding contemporary electronica, crushing rock riffs, huge vocal hooks and anthemic song-writing to the mix. It’s a HUGE step forward in every aspect for the band, and one that will rightfully establish them as one of the most exciting new/old prospects in the UK. ‘Sonic Boom Six’ also features the vocal talents of SB6 friends and allies Jimbo Baxter (Population, ex-Freaks Union) Kat Marsh (Lionface, ex-The King Blues), Mike Attack (Rat Attack) and the debut recorded performance of Kerrang! 105.2 DJ Matt Stocks, as the emergency radio broadcaster on ‘S.O.S (State of Shock)’.

A FULL list of SB6 November UK headline dates are:

Live wise, SB6 have already toured the UK, Europe and the US multiple times in the last few years, firmly establishing themselves as a headline act. They have also played and toured with the likes of The King Blues, Less Than Jake, Bad Brains, Hard-Fi, Reel Big Fish and Skindred, AS WELL AS playing the Main Stage at Reading and Leeds festivals, Hevy festival (2011) and headlined the Red Bull Bedroom Jam stage at Sonisphere in 2011.

1. For the Kids of the Multiculture

6. The High Cost of Living

7. Who Will Survive (and What Will be Left of Them?)