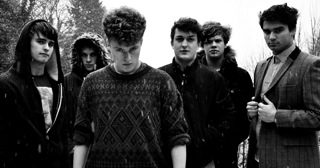 “A great band that will go far!” – Gary Powell (The Libertines)

“We are pop, and we’re not afraid to say that”, says front man Tommy Wright (19). “People describe us as having an Eighties’ influence, with our synth and guitar combination with big pop chords.”

Young Kato, a 6 piece band that met in Cheltenham, have just signed to influential Manchester-based label LAB Records and are currently gearing up to release ‘Young Kato EP’ on 23rd July 2012.  The EP has been produced by Gordon Mills Jnr (Placebo, Ed Sheeran).

Averaging an age of just 18, Young Kato have already cause quite a stir and have played support shows in front of 7,000+ strong crowds in Bristol late last year, and now regularly sell out shows in the West Country.

You can listen to the EP in full here.
http://soundcloud.com/charmfactory/sets/young-kato-young-kato-ep
The band are playing the following shows this summer:
July 26th    The Rainbow, Birmingham