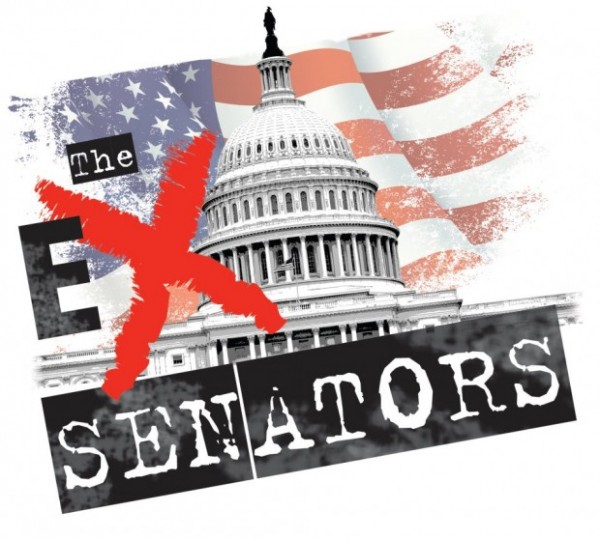 Hailing from a musical pedigree including Bowie and Janet Jackson, The Ex Senators’ self-titled debut was always going to hold an eye on the mainstream. However, underneath the layers of polish, the band have a clear songwriters’ crush on The Ramones and Springsteen, blending a love of the bratty pop-punk song and the world-worn everyman poet in a sporadically smart and consistently appealing package, but one that unfortunately holds only one fatal flaw, and one that mars the feature that the band seem to be pinning their hopes on for this release.

Where The Ex Senators excel is in updating The Ramones’ pop nous, not just rehashing the same few chords but giving them the full post-Rancid US punk treatment, with throaty vocals and massive hooks given equal footing with the prominent, frequently ska-influenced basslines. Take ‘Super Magic Aeroplane’, which revisits any number of giddy teen romances as far as lyrics are concerned, capturing that heady all-consuming feeling, while the musicianship blends agile bass, truly immense “rawk” guitars and a pop drumming style that bleeds some lightspeed danceability into the mix, leading to a phenomenally infectious track that retains some grit thanks to the underlying melancholy of the melody. Far more intricate and indeed accessible than most punk-influenced bands dare to be, it still manages to hold a snarl. Same with the stupidly catchy ‘United Corporations Of America’, which throws all the immaculately-produced clout of Green Day and Alkaline Trio, with the observational stance of Springsteen and the rabble-rousing of Rancid. That said, we hit the snag here: The Ex Senators never quite manage to make their socially-conscious side feel natural. ‘United Corporations Of America’ is incredibly well-written in terms of music, meticulously executed and really damn good until you start to listen and find not so much that it’s been said before (after all, we can’t expect a band to think of a problem no one else has when the big ones are there for hitting too) but that it has been said in a remarkably similar way. Here, as well as on the punchy yet repetitive ‘Start A Fight’, I can’t help but feel that if you were to remove the brief flashes of verbal wit, you’d essentially have the same stuff as you’d find in any young my-first-punk-band kind of outfit, and much of this doesn’t feel identifiable and inspiring so much as a little trite and uninteresting, which is a shame given the band build up such momentum and power elsewhere.
There are some oddly Cure moments too, where punk gives way to a distinctly 1980s feel. Opener ‘Angel’ is one such moment, with its gentle guitar riffs and tender-hearted romance, like Guns N Roses covering ‘Just Like Heaven’. ‘Tomorrow In Love’ follows this trend, which after some harder rocking numbers comes back with the atmospheric, soaring ‘Everything Falls Apart’, where 80s pop drumming collides with Social Distortion’s guitars and any arena band’s sense of scale and attention-grabbing, with a mindblowingly effective payoff as the climactic bridge leads into the last chorus. The sheer diversity of songwriting again hits home comparing the Red Hot Chilli Peppers/Rage Against The Machine funk-punk stomper ‘Psychotropic Love Freak’ where the slap bass and gang vocals call to mind nu metal, when compared to ‘Good Rain’, a country-tinged slow song that has the odd flicker of slide guitar and a bassline that adeptly blends country and Matt Freeman-esque moments, as the vocals rein in the snarl to croon gently which adds emotion through expression where the lyrics start to feel repetitive and throwaway, which is the main hurdle on the politics too.

The Ex Senators have one hell of a debut in many respects: the musicianship, the production, the songwriting are all nearly flawless, blending grit and passion with an irresistible slab of pop appeal. But the band sell themselves on passionate words too: poetry and politics. And these are the band’s biggest downfalls. I’ve heard it all said the same way before, and that means I find it hard to really catch onto it and believe what they say. The Ex Senators are a bloody good example of a US pop-punk band keeping the sound fresh and healthy, but The Clash they are not.