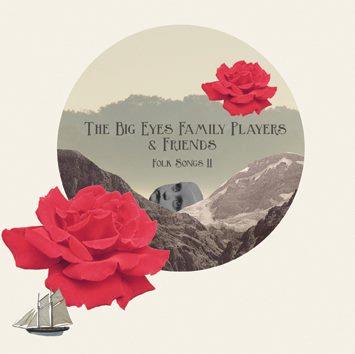 ‘Folk Songs II’ marks the second collection of collaborative tracks between instrumental band The Big Eyes Family Players and their “friends,” a series of guest vocalists, each of whom picks a traditional UK folk song to performs with the band. This means that the chemistry can occasionally feel skewed, but the album for all its shakes and sombre tone has a vitality that runs all the way through it, and eureka moments between vocalist(s) and band that serve to show why collaborations can sometimes hit gold that is greater than the sum of its parts.

One of the strongest features of the album in terms of general approach to the songs is the although The Big Eyes Family Players stick to a strongly folk-influenced sound, they by no means make it feel formulaic, striking a healthy balance between faith to the source material and knowing when to take their own spin on it. The five-minute ‘Stretch On Your Grave’ is a great example, as the instrumentation does little to rattle cages on the surface by following a fairly traditional melody and not having any sounds too far removed from what listeners may expect, but upon further listening, there is an impressive orchestration of the ‘expected’ and something more – not only is there a modernised percussion used, but behind the acoustic guitar and vocals, the lush string section and sighing, vaguely sinister tide of percussion are definitely a new addition, and one that suits the darkness of the song to a ‘T’. ‘Don’t You Be Foolish, Pray’ borrows its pace and hop-skip percussion from modern pop, most notably echoing the girl groups of yesteryear, finding a modern musical answer to the lyrical content, and converting it into a folk song with the fast pace, bittersweet tones and harmonised vocals of bands such as The Shangri-Las and mixing them with the sounds of more traditional folk. ‘Farwell Lovely Nancy’ has a similar treatment, and it was here that the album really clicked into place for me. Earlier on, there seemed to be a certain confidence lacking, but with the sparse opening instrumentation following the beautifully harmonised vocals there is an immediate sense of intrigue, and the whole thing builds with sublime pacing and sense of musicality into the heartbreakingfinal chorus.
There are less adept moments, especially in the first few songs. It would never be easy to try to create an immediately accessible folk album in a modern pop context, and it takes a while for ‘Folk Songs II’ to get going. ‘Greenland Bound’ does hold some allegiances to sound of the recent singer-songerwriter trend by relying upon acoustic guitar and vocals placed forwards in the mix, but it just feels too mournful to start an album with, and the bleak vocals don’t quite suit the more energetic instruments, which really do come into their own at times. ‘A Man Indeed’ is likewise too slow and esoteric, a great round blended with psychedelic rock undertones that would work in the middle of an album, but as the second track feels somewhat lacklustre despite its cheeky turn mid-song. The catchy yet eerie instrumentation of ‘Looly, Looly’ that captures the hooks along with a sense of the otherworldly is where the album first shows its power to capture the listener with its uncanny valley-esque familiar/esoteric tension in the great musicianship.
The last two tracks are the apex of the project, as ‘Bonny Boy’ descends into heady psych-rock guitars by the time it ends, and ‘Maureen From Gippusland’ might have the most traditional vocal style with lilting melodic trills nestled in the vowels, yet its percussive, echoing instruments are among the most avant-garde compositions on the album, and a light-hearted smile to leave the album on without becoming overbearing and daft.

Overall, I’d wholeheartedly recommend ‘Folk Songs II’ but I get the impression that it would only really resonate with fans of folk and more avant-garde stuff or post-rock. That said, there are enough hooks and general appeal to catch a few fence-sitters. An album for musicians maybe, but one with some damn good moments on it.