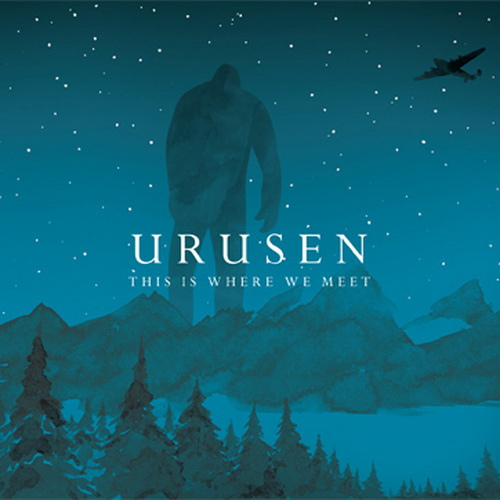 It seems it’s not just the British athletes that are making Great Britain proud; British band, Urusen, is too. Their album, ‘This Is Where We Meet’, is released on 13th August and consists of one brilliant track after another.
Their sound is a little reminiscent to The National, one of my most-loved bands, and so this album is set to become one of my most played. If, like me, you’ve never heard of Urusen before, it’s likely that one of the first things that strike you about their sound is the uplifting melodies and fantastic harmonies. There’s a touch of folk to their music too which helps to make it easy to listen to.
There are 11 tracks on the album and, whilst each song has that distinctive sound to it, they’re all brilliant. One of my favourite things about this album is that even the sadder songs have something about them that fills you with a sense of happiness.
As mentioned previously, the harmonies are some of the best I’ve heard in a long time. The harmonies in ‘From This Country’ managed to give me goosebumps and rendered me slightly speechless. In fact, that song is a perfect representation of the talent held by the band in general – great lyrics, great melody, and impressive harmonies. What more could you ask for from a song?
The album is the right blend of upbeat songs and some slightly slower songs. It’s the kind of album you could put on at any given moment, regardless of your mood. If you’re happy, there’s song to suit your mood, if you’re sad – well, there’s songs for that too!
I rarely come across albums that don’t have a single bad track on them but this is one of them. This album is incredible!

With track names like The Islander and The Woodsman, you will have some idea what to expect from this album by Urusen. It’s redolent folk-rock, dominated by placid and contemplative landscapes, lush instrumental expression and simple, tender melodies and harmonies. There’s nothing particularly original or dramatic going on, but that’s kind of the point.
We open with Wonderland, which sets the scene aptly. If you’re fond of nostalgia infused folk-rock, this is very capably rendered indeed; the familiar combination of acoustic guitar strumming alongside bright and gleaming amplified riffs over the top, wistful backing vocals, suspended string accompaniments, warm and unobtrusive vocals, and gentle chime-like piano. It’s sentimental – but not overly so – and achieved with a level of imagination and technical song-writing know-how.
Wake Up John sees a move to the minor mode, and is even further routed in traditional folk thanks to the more prominent featuring of acoustic guitar. The vocals switch slightly to a storytelling style, and I particularly like the deep, pensive bass, contrasted with further gentle electric guitar riffing and suspended strings over the top. The band demonstrate their structural elegance, with the song building very effectively as it progresses and rounding off to a satisfying conclusion. Things then slow down to a snail pace for Step Off The Train, a very gentle, stripped down folk track, featuring just acoustic guitar and vocals for the first half, with atmospheric strings entering later on. It’s a decent peaceful effort, well-executed if a tad overlong, but with an accomplished dramatic arc
Part of the problem that faces folk musicians is the lack of variety the style sometimes offers. This is evident with the following number, Fifty & 9, which is possibly a bit too similar to the previous song, and is the first point at which I begin to find the album tiresome. Things improve slightly for In Search of the Delta, which has a Coldplay-esque sentiment about it – some will find it moving, others possibly a bit bland.
However, I am soon won over again by A Once Was Tramp and Tree, another slow and pleasant, mostly acoustic folk-rock track, affecting but not over-indulgent. The simple formula is still there – nice moments of strings, soft vocals, dreamy falsetto, oscillations back and forth between chords I and IV, evocative echo effects –no matter how well-established it is, it still works.
There’s a slightly more distinctive feel to The Islander, with its ambient opening, storytelling ballad style, minimalist instrumentation, and sparse, chordal accompaniment. The simple, repetitive nature of the music is perhaps not going to offer much for repeat listens, but is pleasing on first encounter. Repetition is used to more hypnotic effect in ethereal ballad Wanted, its rustling cymbal effects and deliberately fragile vocals inducing me to a state of extreme laziness.
Fortunately up next is The Woodsman, my favourite track of the album, thanks to its extremely catchy central guitar riff, unabashedly wistful lyrics and very attractive melancholy harmonies. A livelier contrasting middle section nicely off-sets the stark ending. Nosediving returns to lighter territory and the major mode; providing a welcome moment of upbeat reflection whilst also making very good use of a simple set of chords and riffs. This is in contrast with the stripped back opening to From My Country, another sentimental ballad that proves a fitting end to the album.
It’s all fairly quaint and traditional stuff that may not win over those who have a dislike for the alternative folk style. However, personally I very much enjoy the album, and there is no denying the excellent songwriting, polished use of instruments, lyrical invention and atmospheric richness the band have achieved.