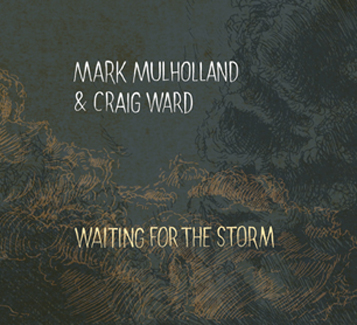 It’s an odd state of affairs when one feels the need to remind a Singer-Songwriter that at some point they need to write some songs. It’s an especially odd state of affairs when one feels the need to say the same thing to two singer songwriters that have collaborated on the same record. Both are eclectic and experienced singer songwriters in their own right, both hailing from Glasgow, before relocating to Europe with Mulholland focusing on his own solo career and Ward joining Belgian alternative rock god-heads dEUS. One would assume that combining their talents would lead to something rather special, but it’s my sad duty to admit that Waiting for the Storm sounds too much like one of those interminable guitar instrumental records with some half arsed lyrics hastily thrown over the top of it.
In its defence, the guitar playing is technically very good. The press release states that they wanted to put their own spin on the likes of Nick Drake, Bert Jansch and Pentangle and they’re not far off the money. So the entirely instrumental tracks do work, they don’t do much more than that but they are solid, Black Sail is especially mournful and surprisingly lyrical, a lot more so than the songs that actually have lyrics ironically enough. Unfortunately they’re few and far between, and I honestly never thought I’d see the day when I’d listen to an album craving the instrumental tracks over the actual songs. The guitar playing is still pretty good, check out Secret Places for proof of that, but the singing is so lacklustre and the lyrics so bland that it just becomes boring to listen to.
There is a big difference between subtlety and laziness, the former leads to the kind of melodies that you don’t notice on first or second listen but still get stuck in your head nonetheless. Waiting For the Storm is so guilty of the latter that most tracks have the life sucked out of them the moment Mulholland and Craig open their mouths. It’s a crying shame because there is an abundance of talent here, one must only listen to the guitar playing to know that, and that’s not even taking into account that one of them was in fucking dEUS, but there are many other artists and albums worthy of your time and energy than this. Folk guitar fanatics and Bert Jansch fans, take a cursory listen. Everyone else, move along, nothing to see here.