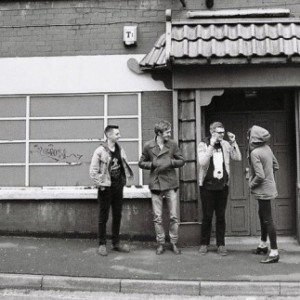 Post War Glamour Girls are a Leeds based post punk band who met at uni and have only been gigging together since January 2011. However, they are already making quick progress and have been chosen to play the NME/Radio One Stage at Reading and Leeds festivals in late August. Before that, the band will release their debut EP “Tragic Loss; he had such a lovely house”.
Post War Glamour Girls describe their music as “art rock” or post punk” as they aim to be a bit more experimental than your average punk rock band. This objective is achieved on this theatrical 4 track EP as the band experiment with various different sounds and styles. The tracks are typically quite heavy- with low vocals and heavy guitars and drums throughout.
“Today I am a man” is an energetic song that begins with a raging guitar battle. Opening track “She will always be my anchor” may sound like a soppy love song, but I can assure you it is anything but! On “tremor” the band reign it in slightly and we get to hear some nice melodic moments in the vocal line- something which is slightly lacking in the other tracks. “Post War Glamour Girls” have the potential to really excel in their genre, however I’m not quite convinced that the recordings on this EP do the band justice.