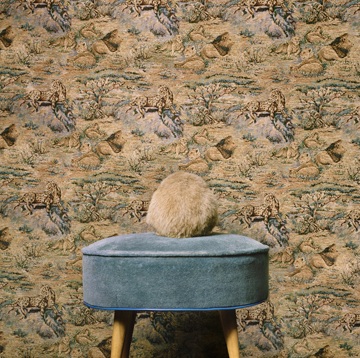 It seems too often nowadays that any newly released album you can listen to conforms to the lifeless, lacklustre formula of ‘Here’s some songs on a disc’, each one isolated and nicely tailored for retail and radio airplay. It’s a rare occurrence when a band dares to break this convention at some point in their career, and an even rarer occurrence when a band has the balls to do this on their first try. Well, consider Brighton-based four-piece Kinnie the Explorer a daring sort, as their eponymous debut album is anything but conventional.
The band wastes no time getting started, with the albums opening track ‘Scissor Dance’ thumping and rattling into life, blooming into beautiful, dream-like curtaining arpeggios and turbulent, perpendicular drumming. And before you know it you’re greeted by the irrepressible groove of one of the best offerings on the album in ‘Mardi Gras’ – a brilliant crystalline rock-out in an ice-sculpture New Orleans jazz-bar, drifting and pounding, guitars weaving spiderweb bridges, while bass and drums jam out with unshakeable cool. And as seamlessly as shifting sands, ‘Mardi Gras’ becomes ‘Verdigras’ – a stunningly simple interlude of sparkling, cascading wind chimes over subtle, ghostly ever present dischordancies. It’s here that the form of the album becomes paramount, as we are not only nicely carried through to the next track, but accentuations of the musical themes from the previous track also make themselves heard to those who listen. It’s stuff like this that you just don’t hear often enough, and it’s hard not to appreciate the artistic undercurrent of the album.
The next track, ‘Empyrean’, swirls in with a mesmerizing melody, but I couldn’t help feeling it ends up taking the backseat once the vocals kick in. Though it is superseded by some inventive percussion work by the drummer – who’s pulling ahead as the star of the album by this point – it’s difficult to ignore the fact that on some of these tracks – not all, mind you – the vocals seem a little superfluous; the instrumental work is sometimes so intricate and enjoyable that it could carry the track on its own, and when its masked and molested by outside extraneous elements, its not a leap to feel the vocals are sometimes redundant. However, in rebuttal to such a criticism, the track opens up to a brilliant, upbeat outro, with some evocative key changes, once again showcasing the strength of the albums instrumental musicality.
A change of pace comes with ‘In Limbo’, a trundling, militaristic behemoth that rolls slowly in like a tidal dreamcloud, arousing coastal wave imagery, thanks to some nifty sound effects. This union of image and sound presents one of the best examples of the dream-like harmony the album strives for. Yes, it sounds pretentious, but refreshingly, it doesn’t feel it. ‘A Platonick Song’ presents a slightly more tangible texture with its stomping bass drum and more radio-friendly and accessible appeal, while ‘Nautilus’ continues on the same ground with tactile, dejected and earthy acoustic lines repeating under overarching wistful guitar chimes and echoing cymbals. Heavy drums bring further tactility, and the occasional trebly paroxysms that sometimes plague other parts of the album with their overbearing wail feel conducive and well done here, before blending seamlessly into the pulsing ‘Crowds and Power’, which feels more like the darker bass-driven side of Nautilus than a separate track in its own right; again a testament to the albums construction.
The album comes to a close with the tracks ‘Fluid Gold’, which, living up to its name, presents shivery-smooth precious metallic permeating auras, leading into a rumbling half-tempo outro with impressive drumming, and the shape-shifting ‘James Town’, a spatial, moody track sporting very subtle folk undertones. For one of the few times on the album, the vocals feel essential, while dynamic arpeggiations change form into an ethereal swan song warble, fading into faintly screeching nothingness.
Ultimately, the whole thing is, fittingly, hard to get a grasp of. As I’ve already said, the album is very well crafted, and its musicality is undeniable, but attempting to stick a one-line label on the whole thing gives you a headache. There is a lot going on in this album, and you end up standing a bit dazed and confused at the crossroads of how to approach it; do you deconstruct, as I have done here, like an overeducated elitist tool? Or do you just shut up and let the thing wash over you? Age-old question. Though it can sometimes feel that the overload of musical elements are in competition rather than harmony, the interweaving of these elements creates something very moving, and its attitude toward the album as an artform is so rare nowadays you’ve got a better chance of finding cohesion at a Pink Floyd reunion. It feels like the album simultaneously invites and defeats analysis, but the end result of neo-psychedelic sparkly shoe-gazey grooving just cannot go without commendation; it’s a bloody good effort, even if I can’t remember a time I’ve heard so much delay, chorus and reverb effects on an album.