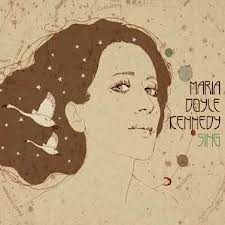 As an Irish actress and singer songwriter, Maria Doyle Kennedy is well known for her parts as Queen Katherine of Aragon in the award winning The Tudors and evil Mrs Bates in Downton Abbey. Influenced by Patti Smith and Marianne Faithful, she’s a renaissance woman who’s performed worldwide for two decades.
Her 5th solo album Sing, her first UK debut album, is released on September 10th, 2012 on her own Mermaid Records label. It was co-written with husband Kieran Kennedy and features duets with John Prine, Damien Rice and Paul Brady.
Am I Choosing Right is a slow, gentle number which is both soulful and thoughtful. It’s an uplifting, inspiring and passionate song from a gifted, versatile artist who “cannot imagine a world without music.” The Silence imaginatively looks at self-determination and the pursuit of identity. This is folk music which is experimental and eclectic in introducing rock, bluegrass, Celtic, flamenco, Appalachian and Mediterranean influences.

Sing is a rich, emotional and ethereal album which is well written and produced. As a creative and accomplished singer, Maria sings daily and music is a priority in her life. With sensitively and intelligence she examines joy, doubt, sadness and magic. Her fine, tender and sensual voice has the ability to make songs that are haunting beautiful.
Track list: 1. Am I Choosing Right 2. Sing 3. The Silence 4. Hola Luna 5. The Most Beautiful People are Broken 6. Twelve White Horses 7. Sing From The Sea 8. Yes We Will 9. Sparky Personality 10. Promises