I sometimes wonder about the crowd security at experimental shows of this nature. Standing in front of the stage with their backs to the performance, the bouncers just witness the wide-eyed amazement of the Squarepusher fans, and their attempts at nodding with some kind of regularity, while a barrage of erratic noise is powered out behind them. I wonder what these burly, emotionless men must be thinking – surely something along the lines of: What the hell is going on? This, I’m sure, is the kind of reaction Tom Jenkinson – aka Squarepusher – hopes for, and welcomes with open arms.

Tonight at the Hackney Empire is Squarepusher’s first London headlining performance of his new ‘Ufabulum’ AV show, and it’s perhaps one of the best visual shows that dance music has ever witnessed. Dressed head-to-toe in black and wearing a futuristic helmet, Squarepusher stands over his digital equipment, which is placed in the centre of the Empire’s sizable stage, and is backed by endless LED screens. The predominantly black and white light show, programmed by Jenkinson himself, is a product of his musicianship – with the lights and patterns being a live reaction to his mixing and music manufacturing. Like a careful conductor, he regularly tilts his helmet from one direction to the other, checking that the screens are in working order (when one briefly crashes out, you can sense the fury beneath Jenkinson’s mask).

The setlist tonight is one lacking in the hits of Squarepusher’s old material, instead consisting of tracks from his 2012 album Ufabulum, an album he plays in its entirety after opening with a couple of songs from his Estrobia EP. Like the album, this show is a hectic fusion of industrial drum’n’bass and bass-heavy electronica, fired out with an avant-garde jazz, freewheeling swiftness. The music is extraordinarily cold in comparison to Squarepusher’s more classic material, with only the occasional synthetic melody hinted at, hidden behind layers of robotic bleeps and chaotic programming. The accompanying lights are at times overbearing, almost blinding, but truly astonishing – in particular the mini LED screen on the front of Squarepusher’s helmet, that manages to give the mechanised pandemonium a slightly personal touch.

‘Unreal Square’, ‘Ecstatic Shock’ and a blistering run through of album standout of ‘Drax 2’ are the highlights – these songs manage to convincingly convey an element of control from Squarepusher, whether it is by incorporating something that resembles a hook, or by reining in the noises to allow for a kind of structure. However, it is the encore where the show transcends any lasting restraints of a traditional DJ AV show, with Tom Jenkison reappearing unmasked, picking up his trademark electronic bass guitar for the first time, and unveiling an improvised jam that controls the visual – each pedal (I lost count at 11) and each note he plays creates a unique, raw electronic noise, complemented by a unique, glaring visual. Verging on the incomprehensible, the industrial and frantic noise that Squarepusher produces barely constitutes music – more progressive audio art, or heavily distorted jazz, that teases with occasional, conventional song patterns. He ends the show with a surprisingly understated cut from his solo bass album ‘Solo Electronic Bass 1’, his 2009 collection of bass guitar compositions, as if Jenkinson knows he can’t let the crowd back into the real world of East London without first sedating them – the calm after the storm.

An excellent performance that cements Squarepusher as not just one of the world’s most innovative producers of intelligent electronic music, but as a visionary of performance art. 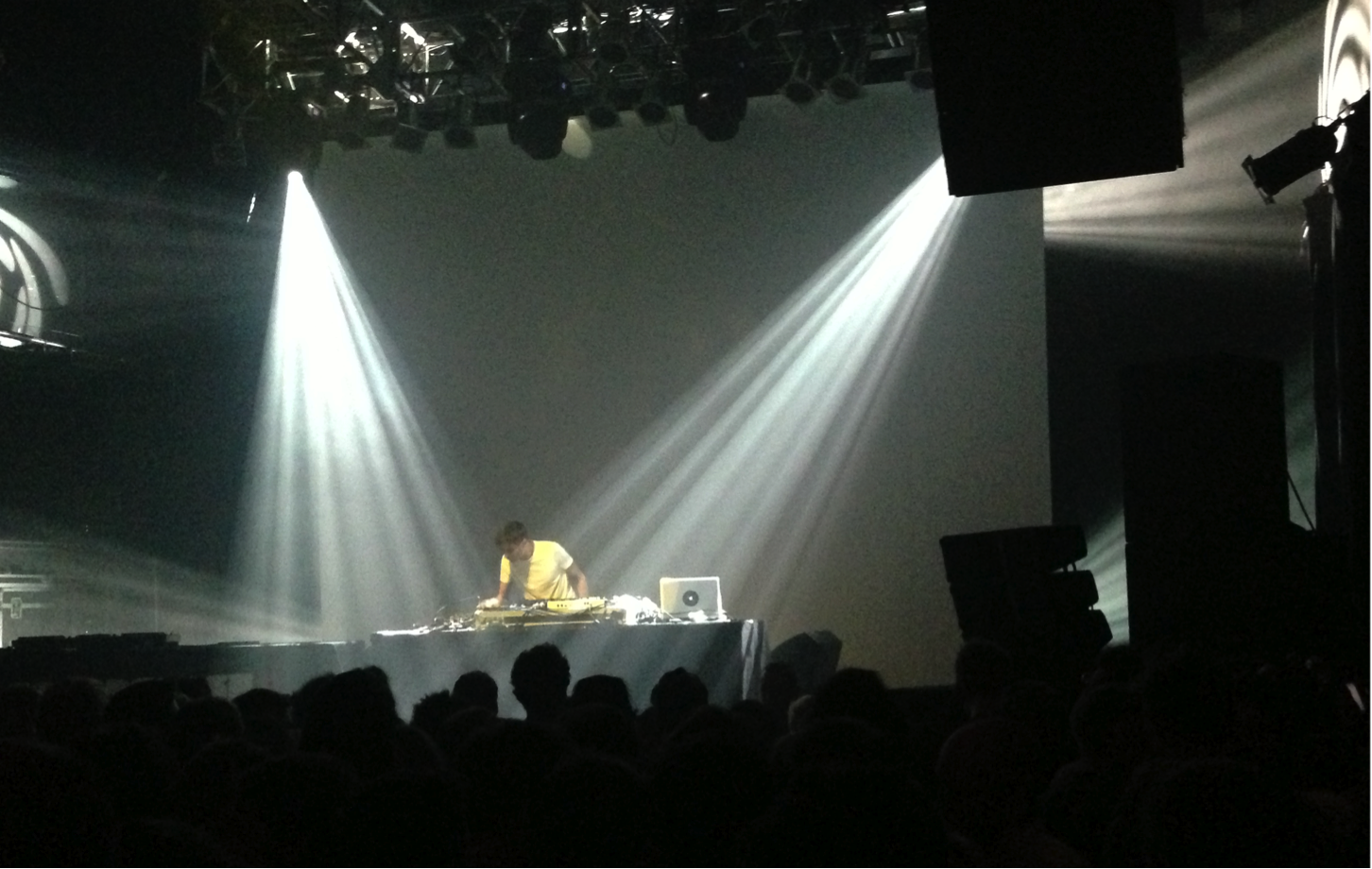