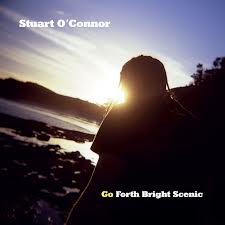 As a psychedelic folk singer-songwriter Stuart O’Connor has, for years, had many extensive tours including New Zealand, Australia, Thailand, Italy, Holland, the UK and Japan.

His latest album Forth ,produced by Chris Hollis and Stuart O’Connor, will be released on 5th November, 2012 on Late Bus Records. It’s the 2nd of 4 albums to be released on the same day as a part of the Go Forth Bright Scenic project and the album title was inspired by poet Jack Karouac’s On The Road.  An ensemble of five musicians were the contributors: Dave Smale, Riad Abji, Vicky Flint, Leon Camfield and Chris Hollis.

Stuart is an avant-garde artist known for his intense observations of life and very political lyrics .  As an experimental musician he has a large following . His interesting fusion of folk  jazz, rock, indie and progressive is well worth a listen by lovers of music seeking new inspiration .