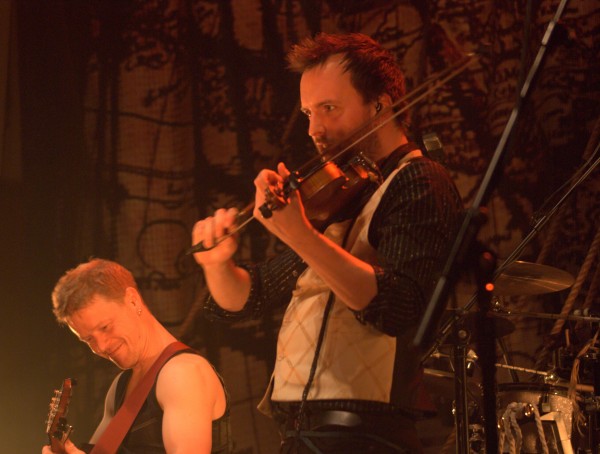 Bellowhead have been making quite a name for themselves bringing traditional folk to the masses. It seems to be working given a sell out at the 2000 capacity Colston Hall in Bristol as part of their tour promoting their recent Broadside album.
The evening was opened by a three piece folk band Mama Rosin from Switzerland a number of songs of which were sung in French, and ‘unhappily’ from the third song a few in English. They bought a heap of energy to the stage to get the evening going with a blend of blues, rock, folk and even a bit of jazz thrown in for good measure. To go with the mix of styles came a mix of instruments too with accordion, guitars and drums being the staple but added by washboard worn like a armour breastplate, intriguing instruments to go with the intriguing music. They certainly did the job they needed to with a portion of the crowd even dancing by the end.

The stage was then set for Bellowhead with the set up reflecting the nautical theme of the album title Broadside and very fitting to a Bristol event too. There was a sea of mics waiting for the band and it did cross my mind how 11 musicians were actually going to fit on the stage. The main event got going with Black Beetle Pie from the recent album giving a start to the upbeat tempo of the night. The crowd were asked ‘Do you like drinking in Bristol?, it shows’. Maybe it was the sea shanty sounds that got the old pirate city of Bristol going and gaining the intoxication from the stage not the pint glass., perhaps inspired by the Temperance Ballad which followed 10,000 miles away that even had the security guard singing.
They has informed the crowd that they would be going to a local pub to do a session afterwards and that must have been quite an event, train times meant sadly I could not join them. Having been to a number of folk sessions in the past, that is what I realised this gig was like, a massive folk session that should be in the back room of a pub at a folk festival, one of the best musical events for sheer energy and passion. They managed to make it feel that intimate amongst those 2,000 people, coupled with the feel from the crowd it was clear the band were really enjoying themselves too with the brass section breaking out into dance frequently. In keeping with the West Country feel there was a quick trip to Wiltshire with an old English folk song of ‘lost love in Swindon’ Betsy Baker giving a slightly more subdued element to the night. Tempo was restored with another traditional song about mining this time Byker Hill, it is quite fanstastic to see a band sell out a massive venue playing very old traditional songs, another of which Lilly Balero went down a storm. It feels a refreshing change from the commercial manurfacrurted bands that are still prevalent. Here we have a number of very talented musicians going out there, enjoying what they do and respecting the musical tradition.

You wonder how so many musicians can stay together at such a pace and at times it sounded like chaotic perfection. They make folk cool, when the fiddlers got going together there was an electric feel to the place. They are coming back to Bristol for New Years Eve 2013 and I am certainly going to be putting it in the diary and if you are in the area it will be barnstorming way of seeing in 2014. I wouldn’t wait that long to see them if you can though as they are worth an evening of your time as soon as possible.