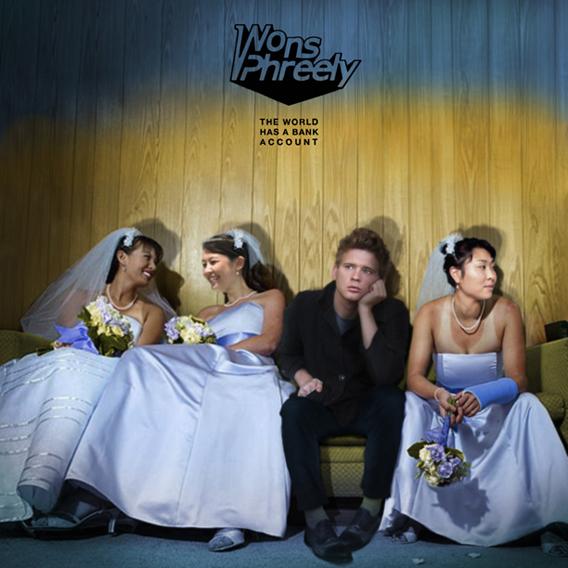 As much as we would like to believe that we are totally free from assumptions and prejudices when it comes to pop music, if one was told of a solo artist influenced by Bob Dylan, Joe Strummer and Billy Bragg coming to their town armed with an electric guitar, a harmonica and songs called things like “The World has a Bank Account”, one would understandable assume that the solo artist in question would be a Woody Guthrie-esque, stern, finger pointing folk-singer trying to save the world with three chords and the truth. As understandable as that assumption is, in the case of Won Phreely, it would be entirely erroneous. While Phreely (I’m going to quietly assume that it’s not the Australian’s real name…) does have distinct social conscience as shown on both sides of this, his debut double A-side single on new record label Ivy League records, but there is no hint of the folk singer tag here, coming on more like Elvis Costello doing Springsteen’s Born In the USA than anything else, and it works, splendidly.
Opening track The World Has a Bank Account is the more subtle of the two, carried on some New-Wave esque beats and loads, and loads of twisting, turning lyrics concerning a girl met at a Patrick Wolf gig who wants to marry into money and use that money to save the world. Of course. It’s a grower, the chorus slowly sinking under the listener’s skin as opposed to leaping into their head and staying there, but it might take a mite too long to get there for most to bother with, not helped by the fact that it’s rather impersonal, and doesn’t say much about Phreely himself. The Night Has and Alibi is much more successful, feeling much more heartfelt on its shoutalong chorus and impossibly catchy synth line. As good as these songs are though, they are much more effective as primers for a very interesting talent about to reveal himself than great songs in their own right, but still recommended all the same. Just don’t go in expecting a protest singer, this is something much more fascinating.