YOUR MOVE, RAINCLOUD – This is what’s left over from nothing that’s happened 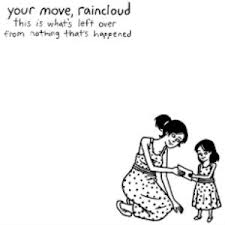 Samuel Francis Cain, a young singer songwriter, is largely the creator of the project Your Move, Raincloud. It’s been many years coming but probably still has a long way to go.

Their debut album, released on 28th January, 2013 through Motive Sounds Recordings, was recorded in a barn in rural Lincolnshire. It has bespoke CD packaging which is illustrated by Chicago comic book artist Jeffrey Brown.

Clearly there are critics who find this album forced, overblown and sentimental. Unfortunately the instrumentation and vocals are not enhanced by background noises such as waves, thunder, fireworks or sleigh bells. However, their dreamy songs have a raw, fragile and intimate feel and there are certainly enjoyable moments where their creativity clearly shines through.