a host of leading English artists 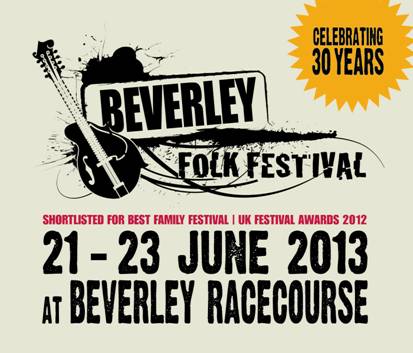 As part of the celebrations for its 30th Anniversary, the Beverley Folk Festival is giving an emphasis to some of the great English artists that are on the music and comedy scene today, from well established names to some of the best of the newcomers.

Headliners include multi-award winning band Oysterband, which carried away three accolades from the BBC Radio 2 Folk Awards in 2012 including Best Group.  Having evolved in the 1980’s from the folk band Fiddler’s Dram, it developed into a ceilidh band, finally finding its feet in its current format as one of England’s finest folk rock bands. It celebrated the festival’s 21st Anniversary, so it is indeed fitting that it should return again to finish off the 30th Anniversary party of the festival weekend.

After a fourth sell-out show at London’s Royal Albert Hall in April 2012, festival favouritesShow of Hands – 2010 BBC Radio 2 Folk Awards double winners – come to the festivalshowing just why they have been showered with accolades. Singer songwriter Steve Knightley and multi instrumentalist Phil Beer won both the Best Duo title and Best Original Song at the Awards – the latter which saw them featured on BBC -1’s  Breakfast TV.Accompanied by striking double bass player and vocalist Miranda Sykes, England’s finest acoustic roots act will be delving into their rich back catalogue of original material.  The quadruple Albert Hall sell-out band who have headlined at festivals from WOMAD to Glastonbury have built a huge following for their inimitable music which crosses from folk roots into blues, rock, country, trad and world. “One of the great English bands” – Peter Gabriel

The legendary songwriter of the band The Christians,  Henry Priestman, comes back once again to the festival. After over 30 years in the music business, and with a credit list longer than both your arms, he is a man who’s seen the music world explode from punk, (he supported the Sex Pistols in 1977), through to pop (three million albums with TheChristians; a top five single for Mark Owen) through to the digital age (soundtracks forJames Bond/Xbox, BBC’s Wildlife on One and still has something worth singing about.

As well as these renowned  names, some of the finest of the younger newcomers on the folk and roots scene will be at the festival, including the winners of the 2012 Live and Unsigned Awards

Co-Co and the Butterfields.   Sam Carter, BBC Radio 2 Award winner, and a great songwriter, who in October last year appeared on the Later…with Jools Holland show will be at the festival as will BBC Radio 2 Horizon Award winner 2012, Lucy Ward. Lucy has the ability to still an audience with the strength and purity of her voice and  her breath-taking delivery. She’s a fine songwriter and a consummate performer who wows her audience with her genuine and sparkling personality, her own brand of banter, crowd participation and her stunning voice!  Newcastle University’s youth big band – Folkestra, will be making a first time performance at the festival and will join in the festival’s youth programme- the Area 2 Youth programme, which will showcase fifteen of this country’s finest young folk acts.

But it’s not all about music and the ever popular John Shuttleworth will be bringing his touch of humour to the weekend on Saturday,   “A National Institution…the 42nd Best Reason to Love Britain” Sunday Telegraph. Star of Radio 4’s The Shuttleworths, and TV’s 500 Bus Stops and It’s Nice up North. “ His stand up is second to none, his timing is impeccable ,and you can practically warm your hands on his good nature “ The Guardian Guide , “Wonderful, wacky, and weird” Radio Times.

To open up the festival’s comedy nights, enjoy the brilliant new stand-up from the loveable Teessider Patrick Monahan renowned for his superb anecdotes. As well as winning the ITV1 series ‘Show Me The Funny’ which led to the release of his debut DVD ‘Patrick Monahan Live’, and was in ‘The Wrestling’ which won an Edinburgh 2011 Fringe First Award. Always in huge demand  with his unique charm and unmistakable brand of humour, Patrick Monahan is one comedian you don’t want to miss!

A packed programme of Englishness, along with some top Scottish artists (The Proclaimers) and Americans (Gretchen Peters; Steve Forbert and Curtis Eller).  Certainly a weekend not to be missed!