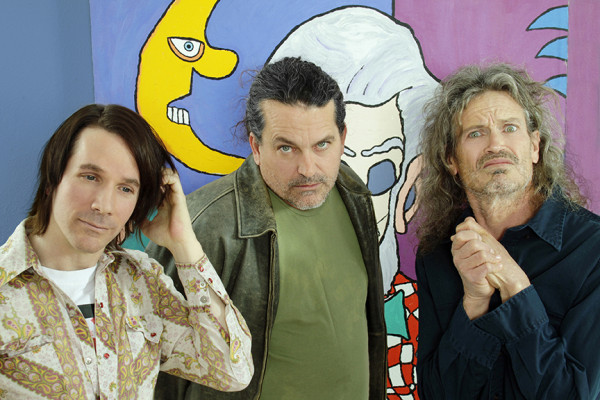 For over 30 years, legendary desert punks the Meat Puppets have carved a unique niche for themselves with an unmistakable blend of cosmic country and punk rock filtered through countless acid trips, dog-eared comic books and their eclectic record collections.  Along the way they’ve earned the admiration of a pantheon of critics and rock music peers. The certified classics reach back to Meat Puppets I, II, and Up On The Sun and have been book-ended by recent releases Sewn Together and Lollipop.With brothers Curt and Cris Kirkwood reunited in 2009 and the 2012 release of the band’s graphic tell-all biography, Too High to Die, the Puppets’ iconic status seems assured.  But the drive to create goes on and fire still burns; the band’s live shows and new material, including their 14th studio release, Rat Farm (April 15th release viaMegaforce Records), are as colorful, vital and undiluted as ever.

Curt Kirkwood says that fans can expect to hear “real blown-up folk music,” on Rat Farm. Songs like the title track feature the effortless laid-back harmonies, distinctive guitar work and psychedelic, cosmic country sound that they do better than anyone. The Meat Puppets might evolve but their sound is unique – you’ll never mistake them for anyone else, nor anyone else for them, despite their influence. And they make what they do look easy considering that they’re deceptively accomplished players.

“I tried to write stuff that would stand on its own  — just the chords and the melodies, and play it kind of straight,” he says of the Rat Farm material. “I think that was the guiding boundary that I gave myself.   It was one of those things where a lot of times, in the past especially, Cris would go, ‘Well, that’s all there is? Let’s put a prog rock part in the middle.’ But I tried to hold it off as much as I could.”

It’s those instincts — knowing when to be understated, the confidence that comes with decades of honing your craft — that keep the Meat Puppets pure and relevant. Their sound will never go out of style because they invented their drug-fueled, sunbaked, country-tinged sound. Accept no substitutes.

The band will play the following shows in the UK as support to Mudhoney as well as two shows on their own: