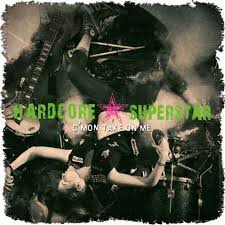 Hardcore Superstar have been kicking around now since the late 90’s and have not really stopped for breath being bigger in Europe then the UK yet they have a pretty loyal cult following and have won Grammy’s in they homeland. They regularly kick out good albums and tour like a well oiled machine and this album simply adds to their cannon, like an AC/DC album you know what your getting and do not won’t any more or less.

This album as usual is a healthy dose of catchy riffs, big anthemic chorus’. It’s dirty, rocking, diverse and above all fun like the kicking ‘Above the Law‘ which is just incredible. We also can’t forget the amazing title track ‘C’mon take on Me’ which is another one of the highlights of this album. I am one of the biggest fans of former guitarist Silver who put more sleaze into the bands sound.

But Vic Zino has more then settled into the role as guitarist. Jocke Berg still has the pipes, his vocals have not aged a bit. ‘One more Minute’ is a future live classic with it’s chant along chorus.  While the acoustic Guns ‘n’ Roses esq. ‘Stranger of Mine’shows the bands song writing skills. The band can easily compete with the top end of their market and its a shame a few of those bands don’t put out albums like this. But if you miss Hanoi Rocks, early Guns ‘n’ Roses or early Skid Row or if your just in the mood for a bit of Hardcore Superstar then you can’t go wrong. The weekend starts here!