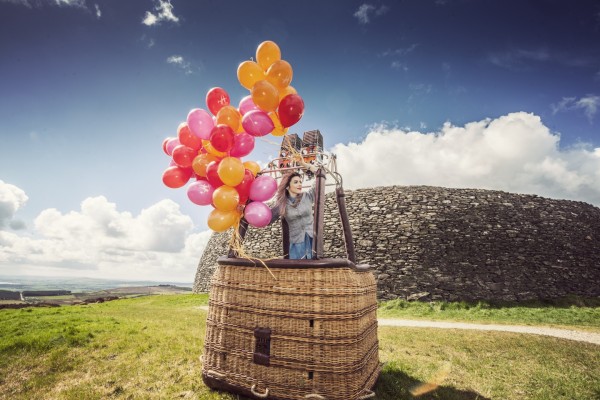 The full programme for Music City! is being launched this week as final preparations are put in place for a massive party which will see Derry~Londonderry transformed into one giant stage with music, gigs, performances and festivals from dawn ‘til dawn across Friday 21 June as part of the UK City of Culture celebrations.

The biggest ever performance of Danny Boy, the return of Orquesta Buena Vista Social club and a stage curated by the founders of Exit Festival-Serbia, Eastern  Europe’s biggest festival, are just some of the highlights of Music City! a unique celebration of music which is taking place at venues across the city.

However, the city will see events of all shapes and sizes throughout Music City! with every street, venue, community centre and school all encouraged to get in on the act.

Chief Executive of Culture Company 2013, Shona McCarthy said: “Music City! promises to be one of the highlights of 2013.  We know Derry is a city of music and this will be a day to celebrate that like no other. From dawn choruses across the city, to sky orchestras and the magic and sunset at Grianan of Aileach, this will not be a day for sleeping. Music City will fill the longest day of the year with a celebration of music of all genres.

“It will shine a spotlight on thousands of musicians, both amateur and professional as the whole city becomes a stage with hundreds of free musical performances across the streets, squares, neighbourhoods, and venues. The world renowned Orquesta Buena Vista Social Club will bring the chance to dance to the coolest of global music at The Venue.”

Derry~Londonderry is known throughout the world as a City of Song, for its rich musical heritage and for the incredible musical talent of its people. Music City! will see the city become one giant performance space with hundreds of free musical performances across the streets, squares, neighbourhoods, venues, churches, offices and workplaces.

The day will start with a dawn chorus at Grianan of Aileach before things really take off as the city awakes to the sights and sounds of the Sky Orchestra, an experimental artwork which will see seven hot air balloons fly across the city playing a different element of a musical score creating a giant surround sound experience for the people below.

Ebrington Square will play host to a festival style event with two arenas. Cities on the Edge, programmed by the founders of Exit Festival-Serbia, will showcase contemporary musical trends from cities such as Harare, Zimbabwe, Havana, Cuba, Beirut, Lebanon and Belgrade, Serbia, cities which have not been so far seen nor been recognised as major cultural production zones. The second arena, The Sound of Legenderry, will host the best bands and musicians from the city including Little Bear, Paddy Nash & The Happy Enchiladas, Wyldling and many more.

Jammhouse Singer Songwriter stage in association with Firstsource at The Craft Village will showcase the best singer songwriters from the North West from noon until 9pm, while young people involved in the SYNC element of City of Culture’s flagship community programme The Music Promise will be performing across the city throughout the day.

One intriguing element of the programme will be the The Sewing Machine Orchestra which will take place at The Shirt Factory at City Factory. Another highlight will be the premiere of a new composition developed by composers/band leaders Brian Irvine and Sid Peacock and members of Londonderry Bands Forum which will be performed for the first time at Music City at The Playhouse.

There will be cash prizes available at the Roaring Meg Street Performance Competition which will see Shipquay Street, Waterloo Street and Magazine Street hosting buskers and performers from throughout Ireland and Europe.

In the evening Derry’s bars and music venues will host a series of free concerts/gigs/performances featuring the best bands, singers and DJs from across the city and rest of Ireland while many more stages and performances are still to be programmed for venues, neighbourhoods and squares throughout the city.

BBC Radio Ulster/Foyle will be out and about in the city throughout the day, covering all the action and providing one or two musical moments of their own.

Organisers of Music City! are encouraging venues, workplaces, shops and businesses to get involved in the event by organising their own music performances throughout the day.  It is entirely at the discretion of each establishment as to the format and duration of their entertainment. Performances could include acoustic singer-songwriters, traditional music performers, bands, choirs, DJs or a combination of any of these.

Fraida Silver, Marketing Director for Firstsource Solutions said: “The City of Culture programme is very important for the local area and has given many Firstsource employees the chance to engage with various activities. We are proud that three of our talented musicians will be given the opportunity to perform as part of the Music City! event. This sponsorship platform gives employees and other budding local musicians the opportunity to develop their musical talent and we are delighted to be supporting such a unique event.”

So whether you are a performer looking to be part of one of 2013’s musical highlights or simply a lover of music then the eclectic offerings of Music City! are simply not to be missed.

More information about how to take part in Music City is available from musiccity@cityofculture2013.com.