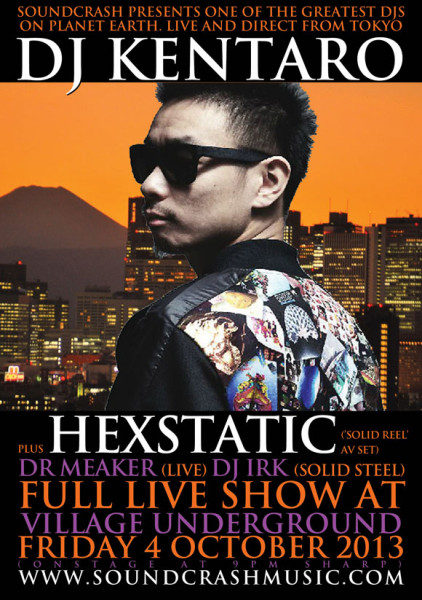 Soundcrash presents yet another full throttle London night featuring an some of today’s foremost sound creatives from around the globe, as Japan’s DJ Kentaro, Hexstatic, Dr Meaker and DJ Irk head to London’s Village Undergroundfor a night set to showcase the best live bass, turntablism, and eye popping audio visual experiences rolled into one.

Known the world over as a supreme turntablist and sound creator, Japan’s DJ Kentaro first entered the consciousness of the global music community by scoring a landslide victory at the world’s biggest DJ battle, the DMC 2002, to become the first ever Asian Champion of the World. Since then he has performed shows across the globe, played Fuji Rock and other large scale festivals outside his home country and continued to tour HARD.

While increasingly playing sessions with singers and instrumentalists, he also started to move his focus onto track producing and started releasing remixes, both of Japanese and international artists, with a clear drum’n’bass bent but never quite straying from his Hip Hop roots. His latest album, “Contrast”, was one of the heaviest releases in 2012 and the live show that accompanies it is sure to do some serious damage at Village Underground. His live shows, projected live on a huge screen, is something to behold, and one you really don’t want to miss.

Hexstatic released three audio-visual albums on the Ninja Tune label and much of Hexstatic¹s work involves integrated audio-visual experiences, be it in production or live shows. Their album releases for Ninja Tune have been CD and DVD combinations with synchronized visuals for each track. Some of the artists Hexstatic have produced work for include Coldcut, Faithless, Schlomo and David Byrne of Talking Heads.

It’d be difficult to place Dr Meaker into any one genre, but as you journey through their music and watch them play live, a theme evolves that can be best described as the New Bristol Bass Music.

Dr Meaker started their journey in 2004 as a Bristol based sound system comprising of electronic and acoustic musicians. The band soon built up a strong following and quickly gained the attention of the BBC resulting in a play of their popular track ‘Rubber Gloves’ on Rob da Bank’s BBC Radio 1 show. Dr Meaker – sure to splice the dirt with the soul to fire up the Soundsystem…

Up last but not least is DJ Irk; one of Solid Steel Radio’s regular contributors, and two-time Mix Of The Year title holder on the show. He’s known for his creative scratch sampling and high-energy sets, and has played live to crowds across Europe, Russia and North America over the last few years, alongside the awesome talents of artists such as DJ Kentaro, DJ Vadim, Kid Koala, DJ Woody, Mr Thing, DJ Format, DJ Cheeba, DJ Moneyshot, Hexstatic, plus many more.
Get ready to get busy on the dance floor…

All the latest event information at: www.soundcrashmusic.com