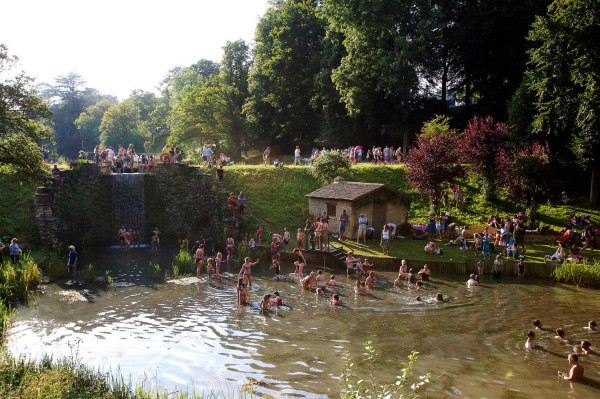 A Celebration Shaped by Nature, a Landscape Transformed by the Arts

Friends of the Earth Busking Stage

Travelling Folk Barn with Two for Joy , The Local and The English Folk Dance

Slung Low, Oxford Shakespeare Company presents “As You Like It”,

Wilderness – The Film from Wilderness Festival on Vimeo.

Talks, Debates and Literary Arts curated by Secret Forum, with support from The Huffington Post UK

Rightfully hailed as one of the most idyllic, eclectic and gloriously paradisiacal events on the festival calendar, the award-winning festival Wilderness returns for its much-anticipated fourth installment in the dazzling environs of Cornbury Park, nestled deep in the heart of Oxfordshire.

This year, Wilderness will once again show why it’s one of the most beloved events of the summer by assembling an inimitable program mixing together the absolute cream of the crop in music, food, theatre and the literary arts across four magnificent days in August. Festivalgoers will find themselves treated to a beautifully immersive experience quite unlike anything else.

The musical program alone is proof positive that Wilderness is always one step ahead of the curve. Heading up proceedings is the one and only Burt Bacharach. Singer, songwriter, hitmaker, six time Grammy Award winner and all-round legend, Bacharach will be making a rare live appearance to serenade audiences with any number of classics from his extensive canon. “I’m thrilled to be coming back to the UK again to perform at Wilderness 2014. I’ve heard wonderful things about the festival and I’m looking forward to a great time in the Oxfordshire countryside”.

In addition, chart slaying newcomers London Grammar look set to continue an astonishingly successful year with a triumphant return at the festival, this time playing a headline set following on from their incredible guerilla gig last year. “Our set at Wilderness last year was one of the most memorable moments of our entire 2013. To be headlining the festival this summer is an honour. Wilderness is a wonderful festival, and we hope we can contribute to its magic”.

Also, following the release of their hotly hyped new album “Love Letters”, one of Britain’s most loved bands Metronomy will be playing Wilderness with their distinctive vein of off-kilter but brilliantly infectious electro pop.

The stellar rollcall of top notch musical talent continues with supreme modern soul diva Jessie Ware, performing solid gold hits with the Wilderness Orchestra from her debut LP “Devotion”. Sam Smith, who just picked up the BRITS Critics Choice Award and is tipped for massive success this year, and the phenomenal American jazz vocalist Gregory Porter, who also just picked up a Grammy Award for his album “Liquid Spirit”. Plus New Zealand psychedelic folker and critical darling Connan Mockasin, riding high on the many plaudits lauded on his sophomore album “Caramel”.

Elsewhere, widely renowned Submotion Orchestra, whose combination of dubstep, soul, ambient, soul and jazz, have enraptured listeners all over the UK and Europe. Emotive balladeers on the rise Sivu will also be playing, along with Irish folk singer Soak, whose tremulous psychodramas are as beguiling as they are unsettling.

As exciting as that all is, the musical roster is just one aspect of this truly multi-arts festival. As usual, the festival have pulled out all the stops once more to bring together an unbelievable array of chefs for a fabulously unique gastronomic experience. Currently installed at Claridges and with his own restaurant L’Enclume crowned the best restaurant in the UK by the Good Food Guide, Simon Rogan will be cooking at the Wilderness banquets for the first time. As will Angela Hartnett, who not only holds Michelin stars but also an MBE for her services to the industry, with her restaurant Murano one of the must-eat places in London. The trio of superlative culinary talent is completed with Russell Norman, who reinvented the Venetian bacaro in London with his groundbreaking restaurants Polpo and Polpetto, plus the super cool Spuntino and Mishkins.

However, that’s not even the half of it. Exmouth Market’s Moro will once again bring their deliciously distinctive Iberian/ North African/ Mediterranean flavours to their Souk dining tent, and, on the other end of the spectrum , one of Britain’s favorite restaurants, the St John Dining Room & Bakery, will be purveying their unmistakably British brand of nose to tail cooking for the discerning foodie. Perched on the hill overlooking the great lakes, the Champagne Laurent-Perrier ‘Orangery’ will delight those who chance upon us this year. Sip champagne and cocktails in the wholly epicurean and immersive environment of the Orangery. Be transported to the age of well dressed men, impeccable service and proper introductions.

There are also many wonders to explore besides, for Wilderness is most certainly an experience for all ages and all tastes. For instance, the arts component is as compelling and enriching as ever, with performances from a stunning selection of the most prominent theatre and arts troupes around. This year, you can expect performances from the likes of Oxford Shakespeare Company (performing “As You Like It”), Shakespeare’s Globe, the Victoria and Albert Museum, who brought you the hugely popular Bowie exhibition, and the experimental theatre company Slung Low, famous for creating unconventional but powerful theatre experiences in offbeat, surprising locations. Additionally, there will be joyous and completely unexpected interactions with members from Son and Sons Productions and intimate woodland workshops and performance happenings from Artful Badger. BitterSuite will also be on hand to awaken the senses with their amazing synesthesia-influenced immersive experiences, and there will be art on show from the Bohemian Artists Studio, who are on a mission to take real “figurative” art from its usual confines and to the general public.

Two of Europe’s leading theatrical arts companies will combine in creating burning parades and spectaculars for Wilderness 2014. Expect awe-inspiring processions from And Now: and Macnas, both taking inspiration from Cornbury Park’s own mythological Wychwood Fayres performed under a full moon.

Moving into after dark, there will be Late Night Revelry with different enticing themes from Golden Ages to the Astronomers Ball. The all-star DJ line up includes: Greg Wilson, Futureboogie, Horse Meat Disco and Zero 7 (DJ). A new secret stage will be revealed this year, hosted in the Quarry. Dance under the stars with your evening curated by Rumpus, Artful Badger and Shangri-La Superstar & Continental Drifts.

As ever, there will also be stimulation of a distinctively more intellectual kind, with The Huffington Post UK co-hosting a series of talks, along side debates and literary arts with the Secret Forum.  Participants include Intelligence Squared, School of Life, Project Wild Thing, Guerilla Science, Book Slam, The Odditorium and many more. There will also be an instalment of the Sunday Papers Live, which brings the weekend broadsheets to life.  Furthermore, Now Live Events are delighted to be coming back this year with a bigger program of celebratory rejuvenation, with the events championing unique ways of being in the moment.

Meanwhile, for children and families there are the splendours of the likes of the Discover Children’s Story Centre, Charles Dickens Museum, Tap Tap Theatre and the Roald Dahl Museum to get lost in onsite as well as circus skills, face painting, kids yoga, adventure quests, treasure hunts, family cabaret and puppetry workshops.

Embracing the Great Outdoors there will be fly fishing, horse riding, archery, woodland medicine walks, wild swimming in clear lakes and boating to indulge in.  While those who just wish to relax and let the world melt away for the weekend can take refuge in the Sanctuary wellbeing area, which boasts Sunset Yoga classes, Pilates, massages and facials. Not forgetting the highly desirable Lakeside Spa, which comes replete with wood fired hot tubs and saunas to luxuriate in plus a private swimming lake.

Taken together, these myriad aspects add up to create a fabulously singular and peerless holistic experience that stands alone in its creativity and innovation; be sure not to miss out.

All tickets available via: www.wildernessfestival.com