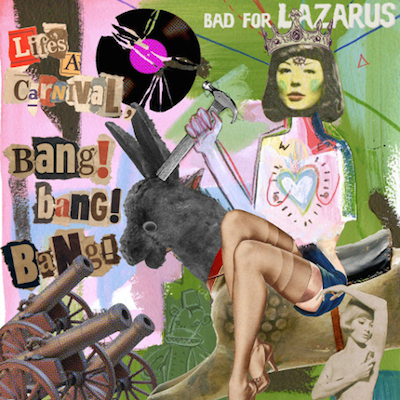 Life’s A Carnival, Bang! Bang! Bang!, is a collection of no holds barred musical madness. The album is an anarchic mix of thrashing distorted guitars meets computerized technological driven beats. The wonderfully weird carnival comprises a collection of tracks that defy categorization culminating in a brave and bold debut album from the Brighton based band.

The intro to ‘Tos and Fros’ immediately sets the listener up for the technological madness that envelops Life’s a Carnival. The opener immediately sets a subtle dark tone that continues through to the frantic riff driven ‘Caught in the Twist’. The second track brings to mind the weird and wondrous styling’s of an early Queens Of The Stone Age, which may be due to the band enlisting legendary music producer Chris Goss.

The genre evading nature of the album is heightened with the twisted saxophone solo in ‘My Muddle’ and a power house soul singer in ‘Disco Biscuits (For Breakfast)’ that enhances the limitlessness of Bad For Lazarus’ musical madness. This is furthered by the overall jazz vibe and swing rhythms in ‘Got Your Nose’ and the unnerving synths in ‘No Cigar’. The energy persists through to ‘Bad Stallion’ that is a percussive, riff driven post punk track with pop undertones.

Stand out track ‘7 Minute Itch’ features the sweet vocals of Leila Moss of The Duke Spirit which adds to the track’s allure. The heavily punk-inspired ‘The Twenty Four’ is the aggressive and hard hitting penultimate track to the album of which frontman Frownes says “musically, I just wanted a punky number for the set and thought, what would The Dead Kennedys do?”. Closer, ‘Billiards’, twists and turns before settling on a definitive style yet maintains an unnerving tension throughout, closing the album on a sustained piano resonance, leaving the listener baffled and shivering with anticipation for more from Bad For Lazarus. 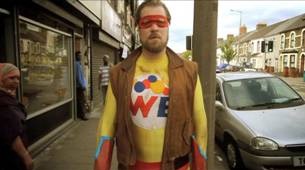