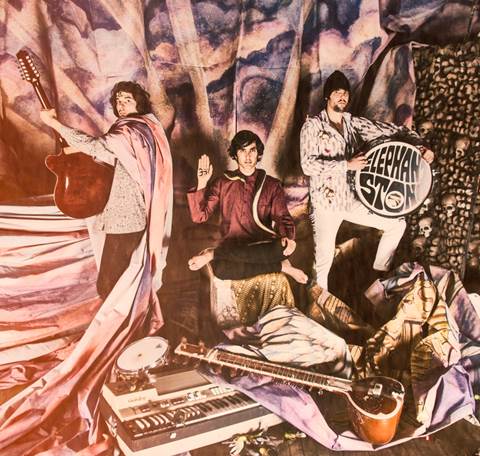 Something I really like about Elephant Stone is how their productions are always so expertly constructed, effectively bringing out the essence of a song. Sounds are always colourful, thick and complementing one another.

Moments don’t force your attention on them so much as with many other bands thriving within the sub-worlds of psychedelia (Tame Impala being a notable example) and they don’t need to in order to create compelling songs. I loved finding different nuances in this album like the little sounds and instruments I hadn’t noticed the first time round. Interesting characteristics of synths, guitar effects, etc. that I didn’t notice the first time around would charm me that much more as I picked them out in subsequent listens.

As with their previous LP, Elephant Stone continue to extend some sections into heavier (albeit relatively tame) psych rock outs. They aren’t extended rock outs in themselves though; these songs don’t often stray past standard pop lengths of four or five minutes, which admittedly does mean that no song overstays its welcome (besides its weakest song, ’Worlds Don’t Begin And End With You’ which I don’t think should be welcome on the album period) but I would love to hear these guys attempt to put something grander down on record by this point.

It seems they’re happier to play it safe, basking in the comfort of their two-part wombo combo comprised of expert arrangements and lush production than to risk taking a song’s structure too far from home. For example, ‘Motherless Child’ is a great sounding song featuring multiple core rhythms and energising drones. There’s an instrumental rock out near the end which, in a more Krautrock influenced world, could go on for at least a minute longer and still be completely justified in doing so.

Instead of going outwards towards the unknown and experimenting with their approach, Elephant Stone spend their time exploring the inner depths of their sound. In fact, while there are interesting sounds and unconventional instrumentation at play here, it never sounds like they’re in experimentation mode, rather that they’ve already spent years carrying out the experiments and reflecting on the results before fine tuning and polishing the tracks into the final product with all edges and corners sanded down.

It’s no surprise that the story of this album begins with the finding of a vinyl stash featuring the likes of Echo & The Bunnymen, Spaceman 3 and Stone Roses. Frontman Rishi Dhir said of the album “I heard the groove of the Mondays, the darkness of Echo, the jangle of Ride, but what I truly heard and felt coming together in this new batch of songs was, and is, unequivocally the sound of Elephant Stone.”

Indeed, influences are very clear throughout this album and yet Elephant Stone does well to meld these influences together into something coherent, consistent and quite their own. Each song showcases a slightly different expression on the formula for their sound as if we kept changing a filter that let different influences through between songs. Rishi channels these influences very naturally, seeming to always build on an idea in an appropriate and mostly satisfying way.

Instead of going outwards towards the unknown and experimenting with their approach, Elephant Stone spend their time exploring the inner depths of their sound.