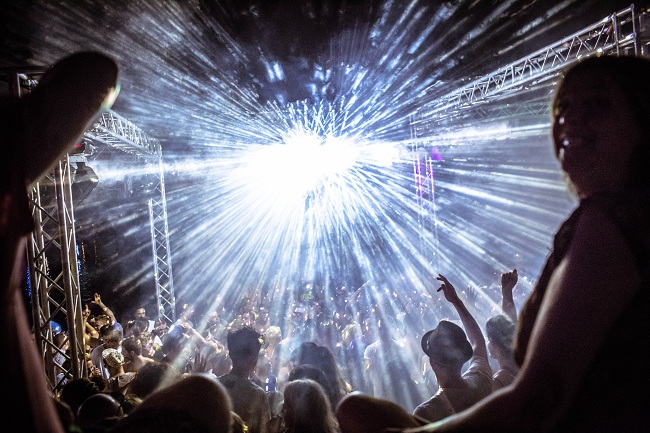 The Garden Festival Croatia 2015
Going Out With A Bang!

Now that the news has sunk in that next year’s The Garden Festival will be the last, the team at Tisno’s HQ are ready to announce the first round of names taking part in the spectacular concluding party. Reaching its tenth anniversary in July 2015, the scene is set for Croatia’s founding electronic odyssey to climax in suitably epic style, once more blending together a beautifully harmonious holiday and festival experience on the dazzling Adriatic coastline. Proud to be leaving a legacy which has helped to inspire and shape the country’s festival scene, The Garden will be bowing out in spectacular fashion, with many friends and family who have helped shape and curate it joined by a brace of amazing debutants performing in Tisno, with many more guests to be announced soon.

The first round of names is topped by an iconic figure the team have always wanted to bring to Tisno – DJ Harvey. Nick Colgan, one of the festival’s founders, explains: “We have been trying to get DJ Harvey to play for us for five years, and now it feels really fitting that he is coming over for our very last Garden celebration. He is of course someone we hugely respect and we know embodies what we have always set out to do here, and he has got quite a special set too if I am honest! Harvey is taking over Barbarella’s all night long on the very last night of the festival which is his only set for us, so it’s a great way for us to go out with a huge bang and for Electric Elephant to start right after we finish!”

Dave Harvey, from Futureboogie and one of The Garden Festival’s bookers, speaks of the other first names revealed: “We’ve also got Seth Troxler who came and played for us many moons ago at the old site when he was very much in his ascendancy. He’s now one of the biggest DJs on the planet but still remains down to earth, and he’s all about the good vibes so it’s a real treat to have him come back for this final instalment.

“Then there’s Joy Orbison, Ben UFO and Midland. Joy is another artist who has been on our wanted list for several years so again it’s great to finally have him on board. And after their absolutely killer back to back session in 2014 we had to get Ben and Midland again – they’ve been good friends to the festival over the years and are both absolute gents, so we are well happy to welcome them again in Tisno.

“Craig Richards’ set at Barbarella’s last year was absolutely amazing, a real highlight of the festival for the team and many of the people who attended – dropping Talk Talk at 6am as the sun was rising was really magical! Musically he’s always interesting and eclectic, and his standing has really risen in recent years too – add the fact he’s a great man to go down the pub with, and we just had to get him back. We have something very special lined up with Craig this year, so keep ‘em peeled for more news on that.

“Then we have two acts who are absolutely integral to what The Garden has been about since the very early days, Greg Wilson and Crazy P (live). Every year these guys deliver the goods and it simply wouldn’t be the festival without them. And finally we are very happy to welcome the Psychemagik boys back too.”

The final festival will feature music across 4 stages, 8 club nights in Barbarella’s Discotheque and 20 boat parties aboard The Argonaughty and The Arbiana salty sea dogs. The Garden Festival will also feature a special 10-hour party at Barbarella’s – news will be revealed soon. And the final Secret Island Party will also take place on the last day of the festival, again with more details to be revealed soon.

The enchanting odyssey has become one of the world’s most idyllic festivals. Legendary boat parties across the dazzling Adriatic, dancing under the sun and stars at the main stage and the incredible water-side Beach Bar, partying by the trees at the new Olive Grove Stage to watching the sun come up at dawn in Barbarella’s Discotheque are all part of a truly unique experience. Boutique accommodation, luxury Shikar tents, apartments and villas are both on The Garden Tisno site and spread around the town, along with many fine restaurants and bars. The stunning Dalmatian region offers a wealth of fun and adventure, with secluded beaches, the historic cities of Zadar and Split and many breath-taking islands to explore.

Whilst 2015 is its final year, The Garden Festival’s legacy will long live on, with a continuing bloom at The Garden Tisno into 2016 and beyond from a season of festivals and events both already established and tantalisingly new. Watch this space.