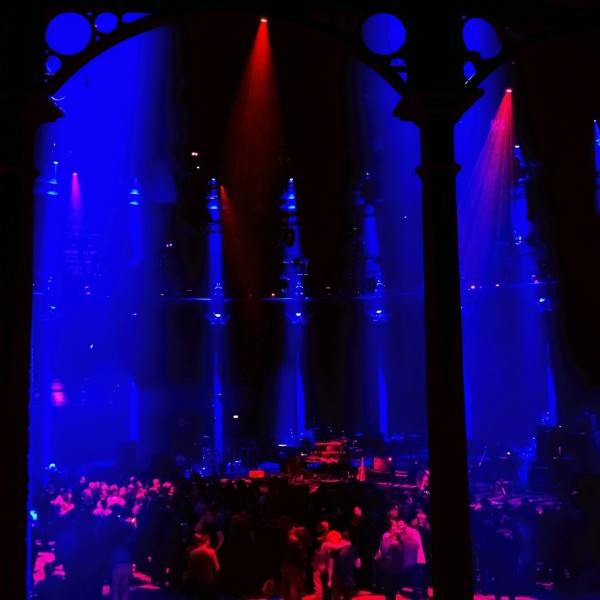 It’s North London, on the 10th of November and there is a murder outside one of the most prestigious venues around, the Roundhouse…

By murder, I don’t mean the cloak and dagger, pools of sticky claret and horror. I, of course mean by a mass of Counting Crows (I doubt that’s what the band refers to their fans as…but I kind of like it). My knowledge of Counting Crows back catalogue is unfortunately limited to that of various snippets from the albums August and Everything After (1993) and This Desert Life (1999). With tracks like ‘Mr. Jones’ and ‘Hanginaround’ triggering memories for me of scalding summers when I was a child and then a pre-teen. Enough about the past, these feathered fiends are back with a new, whimsically titled album, ‘Somewhere Under Wonderland’.

Before this sonic wonderment can be unleashed on us all in the Roundhouse tonight, the fuchsia swirls of the lighting caress the bodies of the eager crowd in the packed stalls. The support act takes their positions on the stage. Lucy Rose is a quintet from our fair city and brings to us a mixture of electro, pop, folk and ambient pieces that (like all great opening acts) builds the audience and peels them away from their smoking areas and bar. Lucy Rose has a tender yet purposeful delivery and a voice that has elements of Icelandic folk melodic phrasing, of which I found enchanting. They are a band of which I, along with many others that were entranced by them tonight, am certain will be gracing the festival circuit next summer. Their minimalist approach and tracks that dip into soundscapes, is something that I did not expect from a gig like this, and this made it even more pleasurable and reminded me a Massive Attack and Florence & The Machine crossover. A particular highlight for me was a new song that Lucy Rose remarked “We haven’t played this on this tour yet” called ‘Nebraska’. This, for me, was a track that would sound at home on the soundtrack for a film about self-discovery, growing and survival.

Now is the time. The time when the lights get dismissed from their duties, duties of setting aglow this awe inspiring space before me in a gothic-like appearance, the 360 degree lighting rig looking uncannily like gargoyles sitting high above the hoards of music lovers below. Bill Withers timeless ballad ‘Lean On Me’ is blasted through the front of house speakers, making for a humanitarian awakening. This goes to show what the band’s overall ethos is, one of love.

Duritz and Co. start the show with a tried and true classic ‘Around Here’ which, with a mighty suction power that Mr. Dyson would be proud of, swallows the screams of the audience and replaces them with an eruption of unison singing. Counting Crows fans are loud. 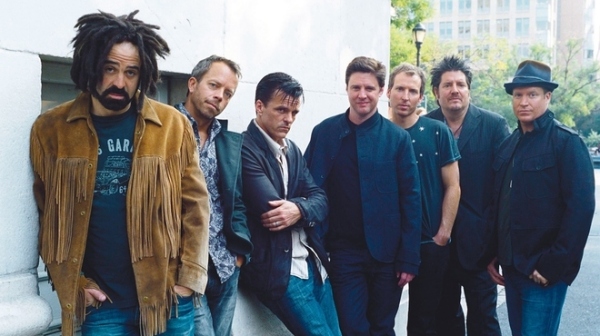 One of the most memorable moments of the night for me was that of the second song to be unveiled to us listening folk. This was the single from their current album ‘Somewhere Under Wonderland’. The track ‘Scarecrow’ is a fiercely addictive piece, a trip down south to where the swamps lay steaming and the roots rock riffs of the Americana outfits like The Band once whistled through the trees. I cannot describe how hooked by this song I have become since that night.

From the dual guitar solos of Dan Vickrey and David Immerglück (which provide great showmanship and flair) and ‘tight-but-loose’ feel of the entire band is something that many bands would envy. However, I in particular, could not stop focusing on Duritz. Duritz lyrics are still held within this grey sponge of mine that I keep inside this boney capsule that is my skull. It contains (or appears to me) an imaginative tilt on everyday characteristics of human emotion using a fictional figure, a lonesome agricultural security guard. ‘Scarecrow’, for me, satisfies everything part of my musical ear and imagination.

Throughout the night, it is clear that, even through all of their dark hours and highest of highs, Counting Crows execute their set with fluidity but also complete honesty. I sat and listened and believed every single breath, note and beat played by this band. This is a quality that many try to replicate and fail too miserably. Another stand out track of the night for me was (unsurprisingly) ‘Mr. Jones’. The particular manner in which this song was performed is the reason why I enjoyed it so much. Duritz becomes a raconteur, delivering the lyrics of this breakthrough track of these in a spoken word poetry kind of style; which adds a new edge to this staple of the Crows’ fan’s diet.

The musical journey that the band takes us on is varied in feel and instrumentation, showing that this is not a one trick pony of a group. With Wurlitzers, Hammonds, Lap-Steels, Mandolins and an Accordion strew across the stage, Counting Crows are not afraid of experimenting with areas that are perceived by outsiders as being ‘out of their comfort zone’. One such track is from their current album and entitled ‘Cover Up The Sun’. This is an all-out country folk song of which Duritz claims before the first chord is struck that “I get a kick out of playing this next song because it’s so unlike anything people associate with us…”. I like that, I admire that, his cheeky, schoolboy excitement out of shocking an audience.

We were then treated to an array of acoustic songs and versions of such, including a cover of the Joni Mitchell masterpiece ‘Big Yellow Taxi’. Then, just when I thought this track making an appearance was becoming evermore fleeting, ‘Hanginaround’ had arrived. It whipped everyone up into a storm of dancing and mimicking of vocals, which I could’ve sworn, may have almost caused structural damage to the ceiling of the Roundhouse due to the noise levels through enthusiasm. It was a tremendously entertaining show and has made me want to delve further into the archives of these imaginative birds and find out what other shiny pieces of musical loveliness I can stow away in my nest of songs for life.