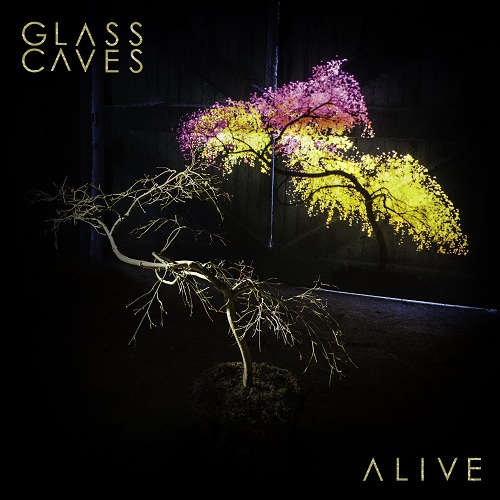 The idea of a glass cave is a rather worrying one…

Firstly, it would become incredibly loud rather quickly if it started to rain. Secondly, where would the bats hang? If everything is glass then there will surely be no darkness during daylight hours? Of course, I’m being ridiculous, but I find it far too fun to stop.

There are some impressive guitar skills on offer throughout this debut album from Glass Caves, entitled Alive, and there’s plenty to keep the blood rushing through your veins. If they were truly situated within a glass cave it wouldn’t take long for the walls to come crashing down all around them. This is an incredibly high-octane construction that if you enjoy the pauses for too long you’ll find yourself left behind as the band are ever running forwards, walls cascading down around them.

Why would you ever want to slow down when listening to something like this? It’s full throttle, rapid fire action and every last region of your stereo field is swiftly filled by echoes of raw passion and aggression. It’s a sugar rush, a caffeine frenzy, that next, crucial hit. Every time you blink there’s more passing through your twitching eyelids than you could have ever imagined. Surely there must be some respite? Some place for the weak-hearted to rest their legs and regroup? Well, ‘Let Go’ is probably where these people will have to drop off. As the slowest, least-intense track on the album this could be seen as a break for your ears. Actually, ‘Match’ starts off in a rather similar way, yet the band are unable to resist the urge to return to full power in the form of an absolutely blinding guitar solo. Seriously, blinding. If it were a visual affair you’d be looking at the sharp end of a JJ Abrams lens flare.

‘Be Together’ has a nice, slightly jaunty feel in places yet everything still feels as though it is being forced too hard. These are guys that have clearly practiced their craft and become masters of their instruments yet everything feels a little too much like they’re pushing their limits, they’re uncomfortable sitting back and feel as though they have to be constantly proving themselves. Of course, this isn’t necessarily a band thing though I could do with a little more personality and range of emotions rather than a selection of track that unfortunately could, for the most part at least, blend into one.

Though perhaps I’m being a little harsh, there are definitely highlights within the album and for anyone that’s into music that rocks you to the core you’re in for a treat. Glass Caves know what they want from their music and they’re not afraid to break doors down to get what they want. A valiant effort.

Glass Caves know what they want from their music and they’re not afraid to break doors down to get what they want. A valiant effort.