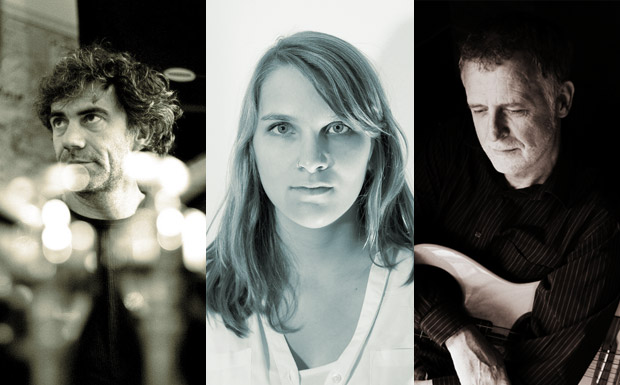 The three talented jazz players perform original compositions by Ronan, relating to French grammar and time, therefore starting from the past, going through the present and ending the concert with the future – that is, with completely improvised pieces.

The first set of three pieces, ‘Past Tense’, begins with ‘Nama’, a dark and heavy track starting with a few notes jerked out by the piano. The asymmetric patterns adopted by all three players give a very unsettling and rough mood, as if one were getting lost in a dark forest. The next piece ‘Brown Birds’ begins quietly with warm harmonies added by the bass. As the title suggests, this track has a very aerial feeling, like a bird peacefully flying over an industrial smoky city. The drums and the piano in turn accompany very well Ronan’s solo, echoing it and supporting it smartly. Then begins the third part, ‘Helter Skelter’, on a more playful and quirky mode; a fast-paced track with an enticing groove, steadily building an ending in apotheosis.

The second set, ‘Present’, starts joyfully with the bright and sunny Cuban jazz-inspired ‘Optimist’. It is bluffing how Marie makes it sound just so easy and natural to play what she plays. The track ends on syncopated rhythms, the exact same pattern played by all three in synchronization – a well-mastered exercise. Follows the much quieter ‘Meander’, with legated ternary patterns at the piano giving a very wavy and intricate feeling – as expected from the title. The trio displays a nice harmony in their playing. Finally starts the third ‘Let’s Go’, very energetically. After this punchy start though, the crew calms down after having made their point, and undertake a frenetic stroll in search of adventure; the bass solo is very imposing and steady, easy to relate to. Marie makes enjoyable little triplets and finally the track ends as unexpectedly as it began – the story seems far from over.

After a brief presentation of the musicians, Ronan announces the last spontaneous part of the concert, comme ça, called ‘Futur’. The piano leads the way, very quietly, quickly supported by a single-note bass background. Christophe on drums gives only a faint metallic sound by rubbing the edge of the snare, while Marie enriches her playing and gradually puts in more color. The whole track has a rather experimental feel, and ends with her, as quietly as it started. The second track begins with Ronan this time, with a charmingly gangling Joyce-like spirit, then toned down and brought back to more serious tones by Marie. A more blues-like and assertive mood settles in the track before ending quietly again. And finally comes the turn of Christophe, who begins with a tribal-sounding rhythm and continues in a free solo before the bass and piano join in, making up a dramatic and intense last part. We can feel the trio much more at ease now than they were in the first improvised track. They go on, after brief salutations, by making up a final quick bis on which you could picture yourself strolling on a trodden forest path right after the rain, all the birds now awaken and peeping from everywhere. A nice last feeling for the night; it was an enjoyable first for Ternary. 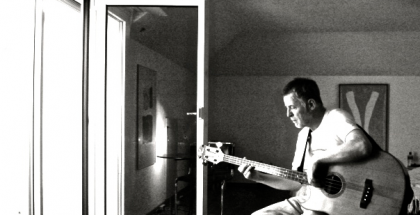