The seventh edition of Tallinn Music Week was a spectacular affair. The Estonian capital was packed as locals and international delegates swarmed to see talent from the local region and beyond.

Stunning churches; state rooms decorated with portraits of war heroes; the brand new centre for folk music; disused factories; ancient meeting houses, the venues were almost as eclectic as the music. It was made clear that this event is considered of great significance when the Estonian president made the opening speech, and the organization and passion behind it were a huge credit to all involved.

The four-piece launched into a swirling jazz build-up almost without warning and continued to follow complicated signatures and patterns throughout. Saxophones, double bass, fiddle and even bagpipes joined the fray, changing direction at will and without warning. Their high tempo performance was a powerful piece of improvised jazz.

A number of DJs have attempted to blend live traditional instruments with their tracks, and it rarely works. Fortunately Aparaat have mixed a delightful blend with genuinely banging beats that doesn’t trample over the flute, mouth harp and pipes accompaniments. The walls shook as Aparaat built their audience into a sweaty, joyous frenzy of dance. 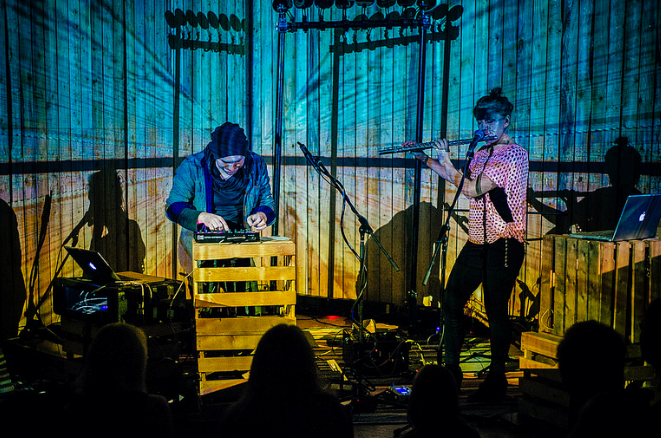 Formed of young musicians, Curly Strings have been thrust into the mainstream in Estonia after winning a number of high profile pop awards. Their brand of high tempo bluegrass is hard to resist, with impressive mandolin and fiddle players taking centre stage. The name tells no lies as several voluminous barnets bop along to the beat and within moments the crowd resembles a vast barn dance. International success seems highly likely.

Using a recording of his own bass and drum playing, C Duncan sat alone with his guitar. Undeterred by his solitude, he delivered a set of upbeat, summer choruses, transporting the packed room from chilly Tallinn to a sun-soaked Californian beach party.

Encamped within a fortress of percussion, drummer Tõnis Kirsipu vanished in a blur of flailing limbs as he laid down intense rhythms and pulverizing beats. Sitting alongside him, accordionist Kulno Malva set to work, headbanging as he produced shamonic chants that coiled up from the depths of his soul. Dark and moody, their set created an intense atmosphere of primal mysticism.

Standing alone with fiddle and foot peddles, Maarja Nuut needed no accessories to help her dominate the stage. Skillfully using loops, her haunting vocals steadily filled the room, her violin cutting through the air. Foot percussion added another layer of trance to the smoky magic of Nuut’s performance. She made brilliant use of space and lighting, captivating her audience. Superb. 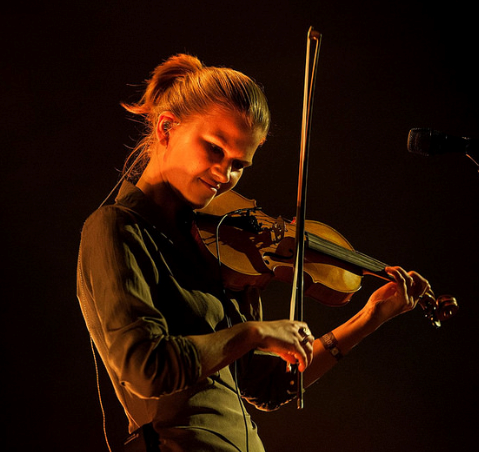 Performing in the regional Veps dialect, Noid drove head first into a tornado of prog madness. Soaring Dr Who synths met with a bumping, almost post-punk rhythm section in an unlikely, but hugely effective mix. Dancing vocalist Ekaterina Fedkina would have slotted happily into the Jefferson Airplane lineup of Woodstock vintage. Constantly, pleasantly surprising, the four piece were a joy to watch.

Kicking off their set with an ancient prayer for rain, Ruut created an archaic, folkloric atmosphere. Impassioned female harmony singing, flanked by creaking accordion and concertina built towards some intense, and strangely chilling crescendos.

Storming on to the stage with a trombone blasting in their vanguard, Svjata Vatra wasted no time before seizing their audience by the scruff of the neck. A rock core, supported by bagpipes, accordion and that one-man brass section, they belted out a set, rippling with muscle and force. With connections to Ukraine, they chose to dedicate their music to peace and friendship. A loving message from a powerful band. 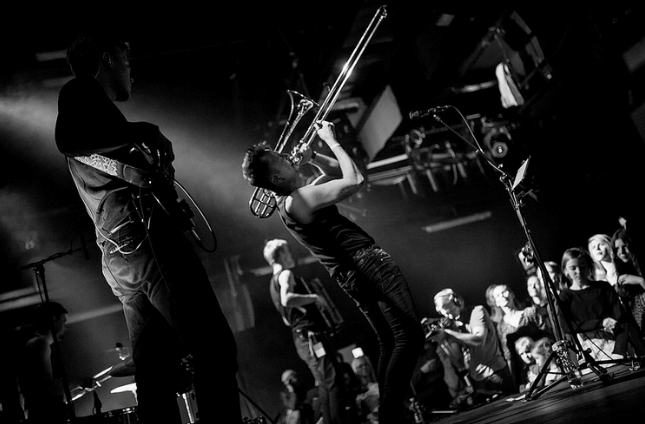 Announcing that all of their material is built around traditional bagpipe tunes, it was easy to fear for the Torupilli Jussi Trio. But their set was excellent. Skillful interplay, solo brilliance and some romping choruses that had the whole audience singing along. Bravo!

After a jumping opening, Trad Attak showed that they can also play with captivating subtlety. Gently building up with 12-string guitar and Estonian pipes, layering filtered vocals and gathering some breath-taking intensity, the audience responded enthusiastically, hanging on every note. 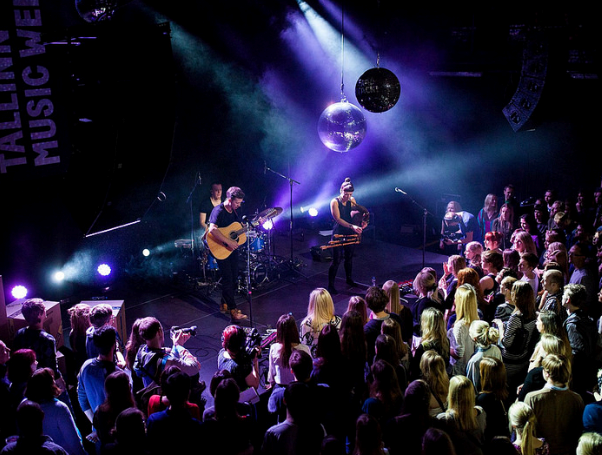 A front line of acoustic guitars traded break neck riffs with call and response exchanges; both Tim Mcmillan and Dan Stiles showing remarkable technical ability. Inevitable comparisons with Rodrigo y Gabriella’s high intensity progressions will be made, but the harmonized vocal delivery from Mcmillan and Stiles added another level of interest to their short set.

Plucked from obscurity after a flirtation with fame in the love soaked days of the early ‘70s, Bunyan has returned to recording and touring after a hiatus of some decades. Ably accompanied by Gareth Dixon, Bunyan proved that she is still a singer capable of creating an ethereal, mesmerizing atmosphere. Her material, old and new, captures a spirit of wonder that left the audience spell-bound.

Former Slits frontwoman, Viv Albertine has returned to the public realm in recent years. A new solo album and a memoir told the tale of her life as a suburban housewife, not the fate expected of the angry 1970s punk.

In a candid and entertaining live interview, Albertine discussed the thrill and power she felt wielding an electric guitar, as well as the depression and hopelessness that overwhelmed her as a stay-at-home mother. Returning to music saved her from the gloom and the withering wit of old was there in abundance as she commanded the room.

THE BASTARD SONS – Release The Hounds