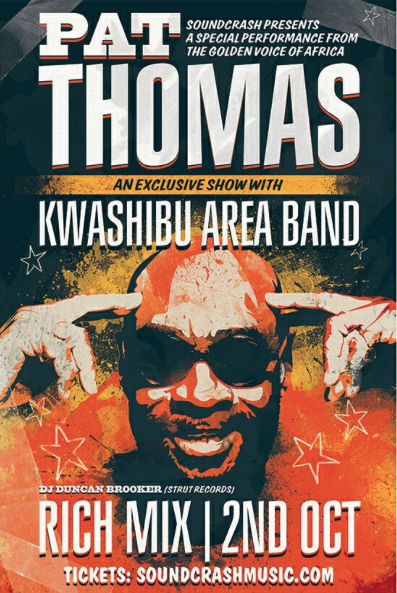 “I’m an afrobeat drummer but Pat Thomas is highlife. That is what he does so well.” – Tony Allen

Pat Thomas and the Kwahsibu Area band will present music from their brand new album, due to be released the 16th of June by the seminal Strut Records.

Get your dancing shoes on! This is an unmissable opportunity to be dancing with the Golden Voice of Africa and his band Kwashubu Area; led by multi instrumentalistKwae Yeboah (Collaborator of Cat Stevens) and Saxophonist Ben Abrbanel – Wolff(Ebo Taylor, Poets of Rhyrhm).

In the early 70’s Pat Thomas Came to Accra to join a band known as the Blue Monks under the leadership of Ebo Taylor. This was the resident band of Tip Toe Nite Club. During one of his shows, one lady fell in love with his voice and signed him up to go to Ivory Coast to form a group called The Satellites. He later came to Ghana to form the Sweat Beans Band which became the band of choice during the Kutu Acheampong Era.

Past was crowned Mr. Golden Voice of Africa in 1978 and won the ECRAC award of the year at the same time. In 1991 he also won the Album of the year with his “Sika Ye Mogya”.

Those who were lucky enough to witness the Ebo Taylor’s incredible Soundcrash show at Rich Mix, you know what’s in store, the perfect night with the warmest and most captivating sounds from Africa.

Win A Pair Of Tickets To Electric Daisy Carnival