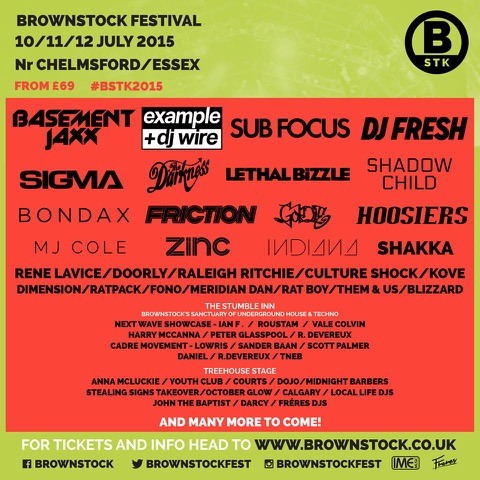 Essex’s small but mighty Brownstock has added Beardyman, T Willliams, Tieks, PBR Streetgang and more to the festival taking place 10th – 12th July 2015. Headlined by Basement Jaxx, Example and DJ Fresh, tickets for Brownstock are on-sale for only £79 from Brownstock.co.uk.

Beardyman, aka Danny Foreman, leads the charge for the latest additions to Brownstock Festival. UK Beatbox Champion in 2006 and 2007, Beardyman offers up a cocktail of drum n’ bass, dubstep and breakbeat in his sets using his mimic vocal chords and an array of tech. Considered one of the most innovative beatboxers, not just in the UK but beyond, Beardyman has torn up stages across Europe and has wowed crowds at festivals, his own shows and Edinburgh Fringe.

T Williams’ musical career began at just 17 years old when he began to make waves in the grime and bass world, fast forward to the present day and Williams has undergone something of a reinvention through his new found love of house music. Williams’ rejuvenated sound saw him named as one the ‘DJ Stars of 2012’ in TimeOut magazine. Tieks, the pop/house crossover producer and musician broke through in 2014 with single ‘Sing That Song’, influenced as much by film as he is by music, Tieks brings a cinematic sound to the Brownstock.

PBR Streetgang have remixed the likes of Lana Del Ray and held a residency at Ibiza’s club-Mecca We Love at Space, next up – Brownstock. Their disco/house set promises to be a jewel in the festival’s crown this July.

Also added to proceedings are Ten Story, Pied Piper and Kokiri, plus Essex’s own DJ Cable and Dream McClean.

With headliners Basement Jaxx, Example and DJ Fresh, plus sets from Sub Focus, Lethal Bizzle, Bondax and many more Brownstock promises a ‘hands in the air’, celebratory weekend of the finest pop, dance and urban sounds this July.

Tickets are on sale now at the awesomely value for money prince of £79 and can be purchased via Brownstock.co.uk.