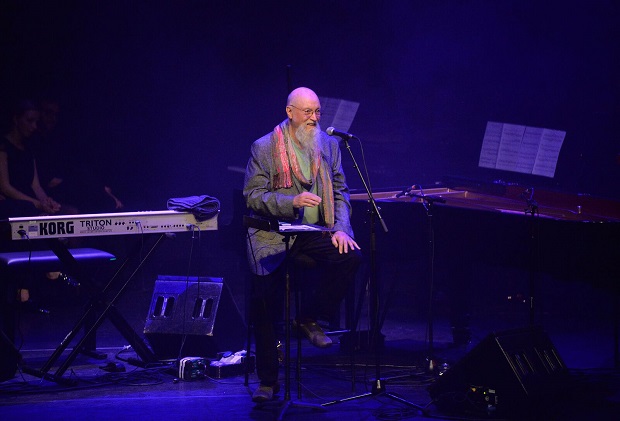 Doug Aitken’s current exhibition at the Barbican, Station to Station: A 30 Day Happening, intends to provide ‘a platform for progressive culture and new artistic experimentation.’ Tonight’s Terry Riley concert, the world premier of Bell Station III, is an astonishing example of the latter. The work itself has been developed during Riley’s weeklong residency at the Barbican Art Gallery where he has been working with the London Contemporary Orchestra, conducted by Robert Ames, and the Tiffin Boys’ Choir, directed by Simon Toyne.

Terry Riley, spotlit by purple, red and white lights, opened tonight’s concert by singing a powerful raga. This first section is influenced by the time Riley spent with the North Indian raga vocalist Pandit Pran Nath. In 1970, Riley began studying with him and regularly accompanied him in concert until his death in 1996.

After this opening part of the show, which lasted for around 20 minutes, the focus expanded to include the London Contemporary Orchestra and the Tiffin Boys’ Choir. By this point, it had become apparent that the format of the concert had changed from the one originally advertised.  The initial plan was for the concert to be in two halves. The collaborative piece was going to be followed by a Riley solo improvisation on a synthesizer. Instead, the two pieces were combined. This made for a much more complex show, and is surely testament to the experimental, genuinely collaborative, nature of this work. This first composition had a dramatic percussion finish. Riley then played the first of his improvisations, which was on prepared piano. 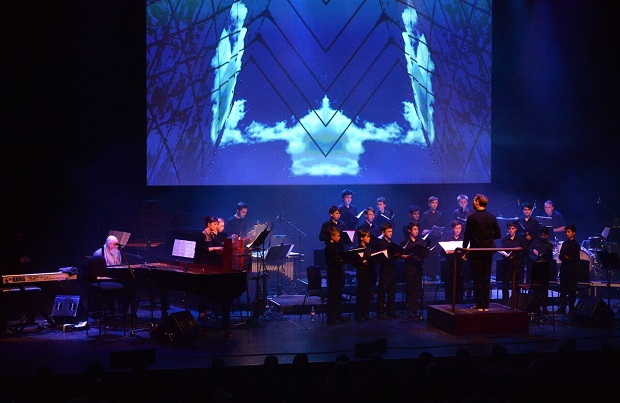 Tonight’s multi-media show included three projections, which, in another collaboration, are credited to Aitken and Austin Meredith. These constantly changed throughout the show. In the first half, they included: mirrored imagery of clouds, reflected in what looks like a glass, architectural structure; aerial shots of fields with tracks carved into them; luscious, multi-layered images of water; and a shifting, blue geometric grid. In a relatively predictable way, the imagery mirrored Riley’s multi-layered music.

It was at precisely the point where the concert started to get a little comfortable that, Riley, once again, confounded expectation by removing various pins and clips from the strings of the piano, and then continued to play it. It’s difficult to tell whether these decisions are highly calculated or arbitrary. However, it is clear that he finds something generative in this tension. The orchestral piece that followed effectively used a variety of brass instruments, steadily building into a captivating, hypnotic composition.

The highlight of the show was Terry Riley’s final improvisation on a Korg Triton synthesizer. Here was another display of his instrumental virtuosity. It is difficult not to admire a musician whose influence can be detected so widely and has, throughout the many transformations he has undergone, consistently taken risks. It seems that Riley has composed this score in such a way as to let his collaborators – both the Orchestra and the Choir, who are aged between 11 and 15 – jointly shape this concert. Tonight’s multi-media show was interesting because the overall structure was sophisticated enough to achieve a certain level of cohesion, whilst, at the same time, allowing the concert to move in unexpected directions.