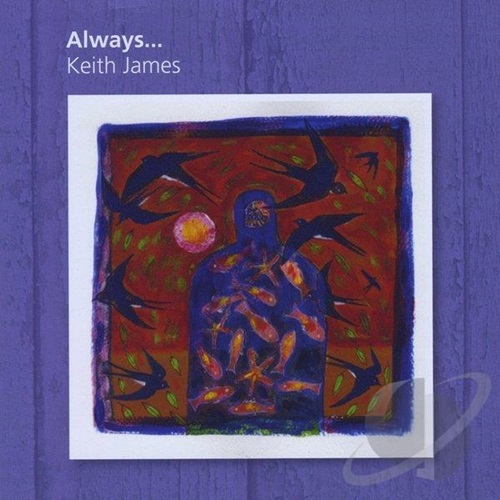 Gifted singer songwriter Keith James has released five solo albums of mostly original material. He’s strongly influenced by Nick Drake and his affection and admiration for him has been shown in numerous Songs of Nick Drake concerts. There’s also a Spanish feel to his Songs of Leonard Cohen performances which combine classical and flamenco guitars with the poetry of  Isabel Allende and Federico Garcia Lorca.

Always, written over three decades and Keith’s first album for nine years, contains tender, thoughtful and observant songs. The sensitive ballad ‘As Love Begins’  dates back to a 1986 BBC Session and the album’s only cover, ‘Girl from the Hiring Fair’  by Ralph McTell, is the personal and beautiful love song containing vivid pastoral images.

Opener ‘Waiting For A Miracle’ , with a mellow and leisurely John Martyn jazz blues style, contrasts with the lively rhythm of ‘Imaginary Friends’ , whilst the atmospheric ‘Melt Away’ is graceful and intimate. There’s a charm and urgency to ‘Only Occasionally’ and the warm flamenco number ‘Always’ , based on the work by Chilean poet Pablo Neruda, feels colourful and passionate.

Always is a bold, fresh and imaginative album  that shows the skill and versatility of Keith James. Despite his relaxed, casual and humorous style, there’s considerable sadness and anger to his emotional songs and he sometimes succeeds in entering the surreal territory of those iconic artists he adores.

Always is a bold, fresh and imaginative album that shows the skill and versatility of Keith James.