Everybody’s favourite new rock band Slaves have had a ridiculously successful year. It feels like just a few months ago that AAA Music were touting them as one of the most underrated rock duos the UK had to offer – they felt like our little secret. Well, the secret is well and truly out. 2015 has seen them receive overwhelming support from the likes of BBC Radio One, the charts and basically the whole of the ol’ Internet.

How did they manage such ‘overnight’ success? Well, coming hot on the heels of that other UK alternative rock duo Royal Blood naturally helped, but the principle reason is their high-energy and wildly memorable live performances – Slaves truly are one the greatest young live rock bands working today.

Original Penguin had the FANTASTIC idea of taking Slaves into Manchester’s Piccadilly Gardens for an ultra-special ‘guerilla gig’ as part of #PluggedIn60, which saw the two-piece doing a rare acoustic performance. Was this a relaxed affair? OBVIOUSLY NOT. Their sound was as raw as ever – if not rawer – and it even ended with some crowdsurfing. Crowdsurfing during an acoustic gig!

Check out the video above to see the pair’s stripped back performance of newest single ‘Sockets’, interspersed with interview snippets, which display their trademark humour and snappy wit. The boys from Kent have done good.

What Musical Style Most Affects You? 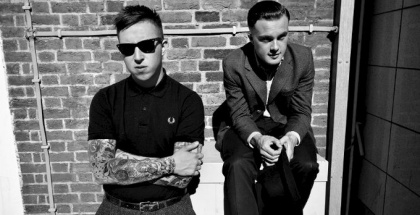