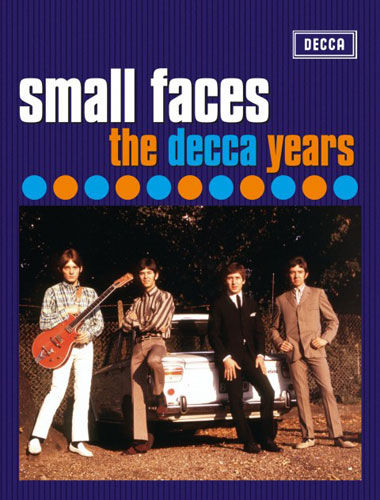 Successful rock and R&B band Small Faces, from East London, were one of the most influential mod groups of the 60s, becoming part of the ‘British Invasion’ and remaining an iconic psychedelic act long after disbanding in 1969. They comprised Steve Marriott (vocals and guitar), Ronnie Lane ( vocals & bass), Ian McLagan (keyboards) and Kenney Jones (drums).

In their original line-up Small Faces were together for just four years, but they became one of the biggest influences on the Britpop movement of the 90s. Memorable hit songs included ‘Tin Soldier’, ‘Lazy Sunday’, ‘Itchycoo Park’ and ‘All Or Nothing’.

The Decca Years, released on 9 October 2015, contains songs from their early years and celebrates their 50th anniversary. It’s a new 5CD box set which includes every recording the band ever made for Decca including rarities, alternative versions and BBC sessions. The audio has been remastered from the original analogue with the help of drummer Kenney Jones who, after the passing of Ian McLagan last year, is now the last remaining member of the band. A rigid lift-off lid box contains the 5 discs, a 72-page booklet, rare photographs and memorabilia.

Their greatest hits compilation from Disc 1 begins with energetic ‘What’Cha Gonna Do About It’ and includes ‘You Need Lovin’ from the Muddy Waters original that eventually became Led Zeppelin‘s ‘Whole Lotta Love’.

The band’s debut album for Decca, Small Faces released in 1966, appears on disc 2. Their second album From The Beginning, released in 1967, is on disc 3 and contains a soulful  version of ‘You Really Got A Hold On Me’, written by Smokey Robinson and made popular by The Beatles.

Disc 4, filled with rarities and out-takes, is a comprehensive collection of 23 alternative versions and mixes, whilst Disc 5, a collection of the band’s BBC Sessions between 1965 and 1966, will probably please both existing and new fans.

Omitted from this particular collection are the Small Faces years with Immediate and, of particular importance, their acclaimed 1968 concept album Ogdens’ Nut Gone Flake which remained at number one in the album charts for six weeks.

A new 5CD box set which includes every recording the band ever made for Decca, including rarities, alternative versions and BBC sessions.