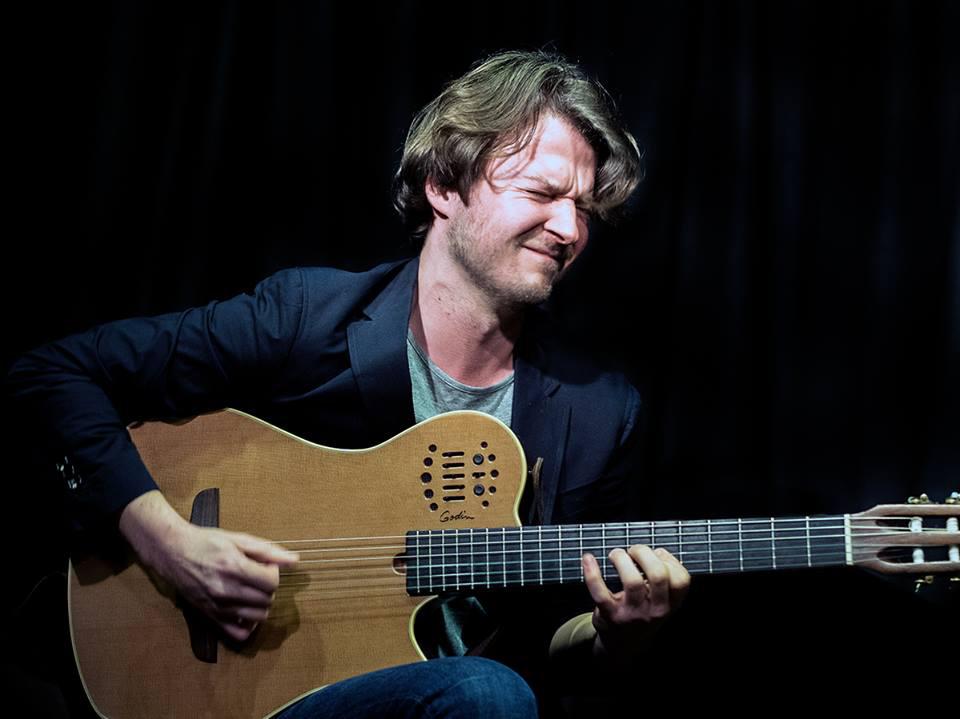 Eloquent Polish jazz guitarist and composer Maciek Pysz is well known for his hypnotic and ethereal compositions inspired by the people and places he’s found on his European travels. As an acoustic and classical guitarist he’s been influenced by innovative musicians like Keith Jarrett, Ralph Towner, Chick Corea, Pat Metheny and John McLaughlin.

His excellent latest album A Journey was recorded at Artesuono Studio in Italy in 2014, released on Dot Time Records in October 2015, and inspired by the tango, Latin, flamenco, classical and Brazilian music.

At this SJE Arts evening, the first of 19 UK tour dates, Maciek Pysz was joined by his harmonic and talented trio Yuri Goloubev (double bass) and Asaf Sirkis (drums).

Despite the initial simplicity, soft and gentle ‘Fresh Look’ developed into a more intricate composition, whilst emotional ‘Water Streets’ reflected on an Italian trip to Venice. The delicate and elegant ‘Story of a Story’ was very impressive and a rhythmical ‘Paris’ helped recreate the poetry, beauty and magic of that legendary city.

‘Undeniable’ pulsated relentlessly with the feel of an endless train journey experienced by a band which was ‘Always On The Move’ to some vibrant and breathtaking destination. Imaginative ‘Desert’, co-written with Italian guitarist Gianluca Corona, was warm, spacious and sensitively played, whilst Maciek’s rendition of Ralph Towner‘s ‘Beneath Evening Sky’ had a slow burning passion.

Maciek is often praised for a crisp, fresh and technically precise performance. To fans he’s the writer of inventive and extraordinary songs, rich, spontaneous and with considerable insight. He also rewards his audience with such a charming smile.

Louder Than Words Festival Returns For Its Third Year