With the release of ABBY’s second album Hexagon seeing its UK debut in October through Island Records, ‘3 Halo’ is just one of 12 intricate songs which feature on the new LP.

The song opens with a low drone which fluctuates, being underplayed by haunting organs drifting in and out of the aural spectrum. As Filou’s juddering introspective vocals course over and intertwine with the intermittent electronic rudiments, at times becoming warped and dissected as the tempo increases and draws to a silence. Thus allowing for a breather, before the listener is reawakened again by distorted electric guitars; which compliment and at times conflict with the softer aspects of ‘3 Halo’.

Collaborations with artists such as George Morales and Apparat, have seen ABBY incorporate more techno facets into their sound, which are significantly present. Conclusively the German quartet made up of: Filou, Lorenzo, Tilly and Henne have managed to craft a song which is tentative, isolating yet evocatively alluring.

Filou, Lorenzo, Tilly and Henne have managed to craft a song which is tentative, isolating yet evocatively alluring. 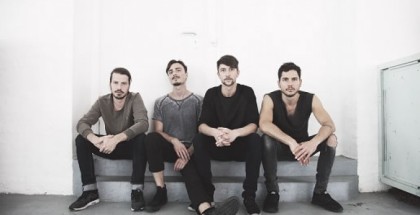