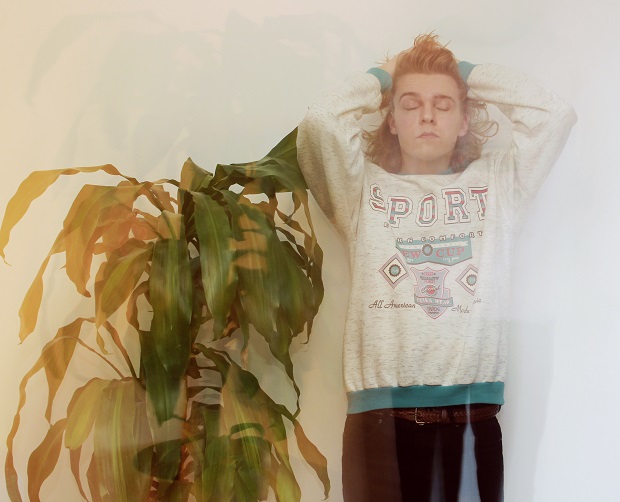 I’m Jaakko Aukusti from Turku, Finland, and I make pop-ish music. After a lifetime of trying to play every instrument known to man and a few years of playing in a variety of bands in the area, I had written a bunch of songs not exactly suited for any of the bands and through a few lucky coincidences I got the chance to record them and release an EP via VILD Recordings. Now through some even luckier coincidences, I’m recording more of them and releasing my debut solo album soon-ish.

I’ve always had a passion for sort of ‘big’ songs and bands – the more ambitious and massive, the better. Not exactly referring to symphony orchestras and child choirs here – more like songs that are sort of maxed out with melodies and feelings. That’s the philosophy I seem to hang on to when making music – trying to stuff as many ideas as possible into one song. That’s also due to my shyness when it comes to making songs and showing them to people, though.

I guess I’m influenced by all sorts of music (cliché, I know)!

I’ve released an EP called Volcano last year and a few songs that are possibly appearing on the debut album when it’s released – can’t be too sure yet, though. The song ‘Shadow Boxer’ got loads of attention on the Finnish national radio station YleX and that really exceeded all of my expectations – I’ve never felt like my songs were that suitable for radio play due to their somewhat tricky nature. Not complaining, though!

I’m really excited about the new songs I’m constantly working on and working with Artturi Taira, who is producing the debut. I’m a huge fan of his former band Rubik so it’s been really, really cool working with him.

When playing live I’m accompanied by a handful of my extremely talented friends who also happen to play a handful of instruments – there’s usually seven of us including myself. It makes logistics like trying to fit on the stage a bit difficult, but it’s extremely enjoyable. When recorded, the songs have a more electronic and sort-of-experimental approach, and when playing live we try to mimic the recorded sounds with more traditional band instruments. It feels like the right approach, at least for the moment.

I guess one of my personal favourite gigs that sticks out is the two-gig micro tour we did with the Finnish band NEØV in Turku and Helsinki last year. It was one of our first gigs as a band too, and we were really, really nervous (at least I was). We had a really great time and after a while talking with the lead singer of NEØV, Anssi, we realized that he might’ve been one of the first people to teach me how to play guitar as a kid, since one of my cousins is a childhood friend of his. That was weird. A few months later they invited us to play in Kuopio where they curate a festival called Gramofon Fest, which was also a great gig. We’ve also had the chance to play at Tavastia, Helsinki and Ruisrock Festival in Turku, which I thought to be pretty much the coolest places ever to get to play when I was younger – it was pretty exciting.

This is a hard one. I guess I try to combine poppy, catchy melodies and easy-approach tunes with bit more complex and ambitious arrangements and instrumentations. So maybe I’m a perfect fit for a music enthusiast who claims to only listen to obscure noise but secretly likes Coldplay.

I try to buy as many good records on vinyl as possible, but to be honest I use Spotify a lot too. Mostly because I’m usually a bit too broke to actually buy any vinyls.

I’m feeling really confused about the idea of not making albums anymore and only making singles instead – I’m not interested in that at all. I’ve always liked listening to whole albums more rather than just the one song. Most songs reach their full potential when put into the context of the album, and I consider making a great, coherent full length record one of the greatest and hardest things one can accomplish in making music.

I’ve been in a Radiohead phase recently – King of Limbs is an insanely good album and I’m anxiously waiting to see if and when they’ll be putting out anything new. The approach to songwriting on the record – playing traditional instrument tracks through a turntable emulator software and such – is really fascinating. I recently listened to Oneohtrix Point Never’s Garden of Delete for the first time yet – I’m curious to find out how that’ll turn out after a few more listens. Haven’t listened to Animal Collective’s new record yet – I might do that next.

I’m currently making new music and simultaneously recording it as it comes with Artturi Taira, and the debut album’s well on its way. We’re hoping to have it finished (at least recording-wise) before this summer. Then I’ll hopefully get to release it, and someone will buy it and/or listen to it and maybe even enjoy it!

LACEY – I Don’t Owe The World A Thing