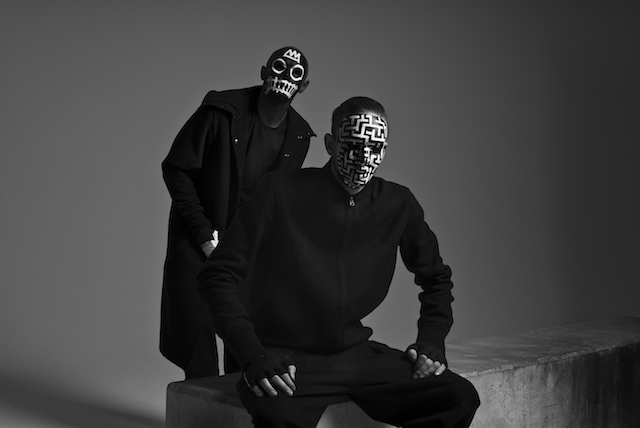 Kiko King: My background is Native American. I´m from everywhere. I met maze at his house on his couch. I was to meet a friend there and was earlier than the friend and maze walked in while i was sitting there already….eating gummy bears.

creativemaze: I´m just a guy who loves making music. grew up in Baden, Germany. learned some instruments and engineering. nerd.

Kiko King: No inspiration. Was bored and tried something new. Airbender music is the genre because we base most of our music after sounds of the elements and we are Aquarius (water & air men).

creativemaze: Everything. I think every human being in its actual form is the result of all the inputs it received since born. Plus all the (illusions of) decisions that were made on the way.

Kiko King: We have been on tour with GUS GUS, Massive Attack, Tricky + EP (OBIA) and Morcheeba. Our debut album Gnothi Seauton was released this Nov. Before that we released 3 EPs all of different genres. Rock, piano ballads and electronic dance music.

creativemaze: Spent loads of time on my DAW ;)

creativemaze: Come feel some subbass! We are very lucky to have Kraftwerk’s live-sound-engineer in our live-team; that means very clear sound, in which KK´s chaos can bath.

Kiko King: I have no idea if we are unique or not. We just play, man!!!  We go about this with light hearts and based on having fun. It´s kids with instruments. People probably listen to it because it comes from a real place not based on just the mind.

creativemaze: We keep following our hearts/souls/cosmic-energy-katalysators/whatever there is..   for new songs: we just go for it. There´s no rules or restrictions or something like ‘we can´t do this or that’.

Kiko King: It really does not affect me so much. I have no computer or internet. I live kind of a caveman existence. Maze is more the technical guy for that stuff.

creativemaze: I don´t listen to music a lot. for me physical is the real deal or 48/24.wav. fuck that mp3 bullshit! Especially when you worked for a long time on a release. But now is now. Kids nowadays seem to have a life that doesn´t know the absence of internet. I feel like the artist´s idealism would like all of them to spend thousands to get a high-resolution soundsystem, so they get it.

Kiko King: Ha. One moment at a time. I don´t make plans and don´t really expect anything. Just going, glowing and flowing. The rest takes care of itself.

creativemaze: Keep on workin’, getting better, release more, smile more – everything else will fall into its place.