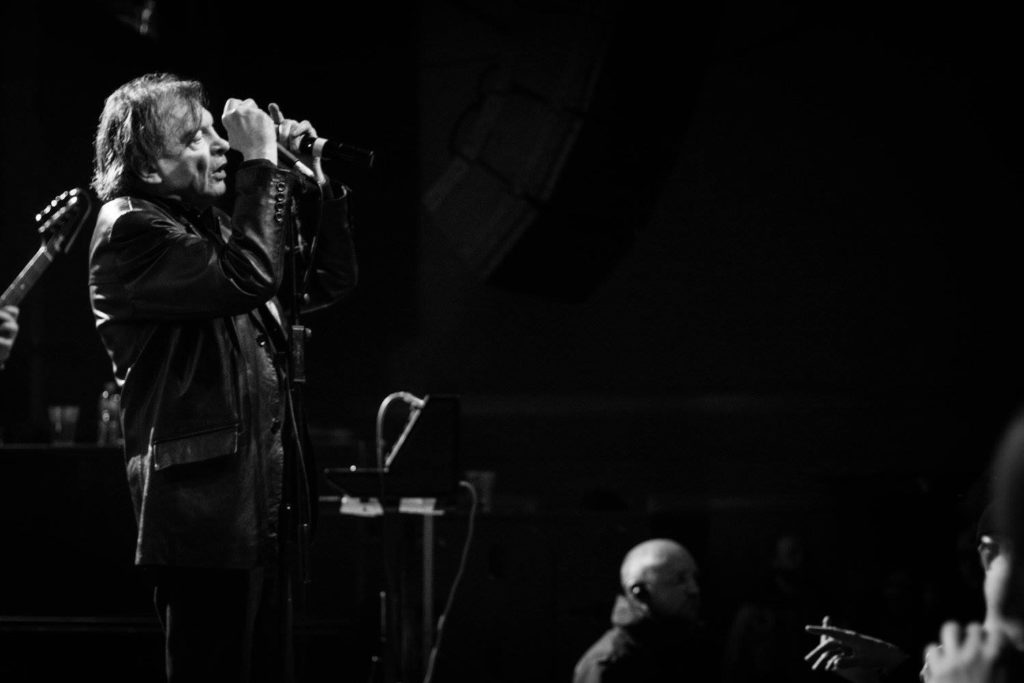 I’ve seen The Fall once before. They were playing at The Garage next to Highbury & Islington Station. I was celebrating a successful support slot I played for them earlier that evening, ensuring I had minimal recall of the night. Despite this I still remember some details of what their show was like; decent fun, energetic crowd, tunes sounded alright and a wasted Mark E Smith relied on the band to play the music while he just walked around whispering incompressible nothings into the mic. Also they actually had someone to play the keyboard.

We’ll get back to which specifics carried over to this latest performance at the end of this review to mirror their billing on Saturday’s Club.The.Mammoth All-dayer at the O2 Forum in Kentish Town. Five more bands preceded and made for a very nice looking line up: Goat Girl, Tigercub, Hookworms, Girl Band and Future of the Left. With loose associations with all 5 of those bands and a general fandom of the latter three, I was anticipating satisfaction in spades. A morning work shift meant I had to miss out on Goat Girl which is unfortunate as they are the only band on the list I haven’t heard before, and now my curiosity remains unquenched until I find the strength to google it.

Tigercub’s sound check on the drums was massive. By the time they took the stage my ear plugs had already settled in and gladly so. The trio’s sounds blasted out across the hall as this relatively new band takes up the honour of being a part of this line up with confidence and gusto. The songs take on different styles and tend to feature some thoughtful chord progressions and generally interesting constructions. At this point there are still moments where the range of songs feel like they’re ticking stylistic boxes without the band having yet found their own distinctive sound. However as the set progresses and they dig into some meatier tunes, Tigercub really start to round off a great set and earn those enthusiastic cheers from the crowd.

Hookworms come up next and soon start casting their spell over the audience. They set people in a trance with their strong understanding of a their chosen approach, building into those sections where the bass hits and chordal gain between synths and guitars begins brimming from the soundscape. The vocals are like a rallying cry and the players are deeply locked in with one another. They build the intensity at times with hyperactive visuals burning as a hot white on the screens either side of the stage. They then begin bouncing between this furious brilliance and some contrasting deeper shades of red and purple. The excited stage lights never stop their dance. In all directions, one’s senses seem to agree. The singer’s shouts soar with delay while the music takes flight. The only issue I had with this set is that they didn’t strive for enough variation, so these flights were energising but rarely affirming due to a lack of contrasting moments.

After this performance and another break, Girl Band come onstage. The crowd is extremely excited. The bassist hangs his hand above the bass neck and starts to sleazily slide a finger across the frets, a minimal menacing sound to which the crowd reacts excitedly and singer Dara Kiely starts absolutely tearing into by screaming into the mic, facing the audience defiantly and never breaking his poise. We officially have our first mosh/dance-pits of the day as the second song does its thing and I am quickly convinced that holy… Girl Band are good. Everything about them is rambunctious and exciting but they also have a maturity in how they build their ideas. There appears to be some painstaking love behind the construction of these beasts, and it really does only feel right to treat their beasts as living, breathing, maniacal things. The impressive set of lungs and resilient throat of Dara keep him from ceasing his shouting, yelping and screaming, all of which magically acts as a sort of lifeblood to the band.

Future Of The Left clear out our listening pallets with an opening sample of Madeline Kahn’s rendition of “I’m Tired”, from the classic Blazing Saddles. From this they enter the stage and ring out their instruments before quieting down and chanting the lyrics “roll on”, the opening to “adeadenermyalwayssmellsgood”. The song then lands into its irregular and very cool groove, fitted with a scream from Andrew Falkous that’s so raw, vicious and strong enough to rip your fucking head off. These kind of catchy as all hell tunes and powerful vocal performances will remain a highlight of this set and continues into another classic of theirs, “Arming Eritrea”.

After FOTL close their set with a good ole medley and leave the stage, all the bands from after this millennium’s turn are finished and it’s time for the biggest wait of the day. Most of this rather large crowd take a break from the arena to go for smokes, drinks and trips to the toilet and dedicated food stall. I went for a smoke and overheard that I wasn’t the only one finding some problems with the sound (guitar and bass levels got really over-distorted at points) and progression of some of the sets. I started getting the impression that those on the arena floor not caught up in dancing and moshing were having a harder time getting into things due to some sound and progression issues; every set was a healthy length so if one isn’t fully into a given band I can imagine interest easily being lost.

And now finally – The Fall. With all the equipment of other bands now removed from stage, Mark E Smith and the gang have the biggest space to play with of all bands. This leaves very present gaps between the musicians, further compounded by their own static presence  and non-present keys player. A Korg keyboard just sat there, looking all lonely. It was at least apparent that any sound issues from before had been resolved so that the drums, guitar and bass levels are playing nice with each other.

But then something else seems to be going awry. Mark E Smith to be specific. He appears very drunk and totally incomprehensible. The music chugs along and because I don’t know the songs very well, its hard to know if the vocals are supposed to be quite ‘like that’. I don’t think they are. They’re consistently random and against the music and then drop all of a sudden at times when it looks like Mark doesn’t really know what comes next or which part of the song he’s in. Still, at least some of the crowd seem to love it; songs play to much dancing and end to big cheers.

Mark never looks phased by this big stage and room he’s found himself in. In fact he looks as disinterested in anything as possible, using the interludes between his ramblings to walk about the stage and check on the amps next to the drummer… for some reason. It’s hard to tell what exactly is on his mind but at least he’s managing to stand up and walk in straight lines. He also wins most of his matches against the mic cables and stands littering the stage front. See, all the space on stage isn’t wasted. It gives Mark something to walk around on, which is something for him to do. Oh wait I forgot, he has plenty to do – there’s that lonely Korg just sitting there going completely unloved. This cold reality occurs to Mark eventually and so he starts periodically approaching it to give the keys a good mash. Big random “BWEEP BWOOP” noises go big instead of going home and I guess you could call this punk. But it’s the kind of punk that shouldn’t really warrant whatever money he’s making by doing this.

Maybe all this wouldn’t be a bummer if the original tracks (which just play background music to the Messy Mark parade) were more interesting in themselves, and I know that The Fall have some of that. But I’m losing patience. The whole situation makes me want to rant a little bit; that big names can do what they want on stage while smaller names must claw for the opportunity. But I guess that’s all part of paying your dues as a band and everyone else on this bill has been and still continues to do so. I wish them all luck and love in their deservedly bright futures, as long as they promise not to The Fall so low… (I know, sorry).

By the end of one of the songs, Marky was doing his noise jam on the Korg and must have jammed a key or left a mic sitting on the keys because a humongous buzzing of a note sat over the rest of said song and continued to hang after the song finished and the crowd cheered. I thought that in the silence before the next song maybe someone will stop it, but no they just went into the next song. I guess I could interpret that as something done on purpose if the note didn’t continue to rudely distract from whatever the next song was trying to do. It just kept going and going. I never found out what happened to that buzzing note because I left at that point, as did numerous others. Some say if you walk by the O2 Forum late at night, you can it still hear it buzzing.

Props to Club.The.Mammoth: this was a great event and, fair enough, The Fall are a safe bet, because they will always sell tickets to lots of middle-aged blokes who knew the band when they were something real. But now CTM has more interesting and dedicated bands to work with, I have high hopes for their future.