Wow! “Best gig since seeing Nirvana play at the Norwich Arts Centre in 1989”, is what I heard more than one person say when walking out of The Crypt after this gig. There again, this performance had everything, including a small intimate venue within a beautiful atmospheric 14th century crypt under Bedfords Bar in Norwich City Centre. It was ideally suited for this band who are destined for great things.

I have to mention the support band New Scientists who were superb in their own right. All very young but they played with real heart and emotion original songs straight out of rock school and not unlike the Arctic Monkeys.

On to Starcrawler, and what an absolutely astonishing and exciting show they put into 38 ecstatic minutes. This is the sound of Classic Rock vs Punk Rock with a lead singer who is both theatrical and a great singer. Though the whole band were absolutely awesome, I feel most of what I appreciated was due to Arrow de Wilde. Her entire character and performance was just about the most insane and totally outrageous thing I might ever have seen, dressed in what looked like a hospital gown. She flailed around like a mad person let out of an asylum, interacted with the crowd exchanging fake blood with some and then fell to the floor flailing and bending her body in almost impossible shapes, and moments when she looked outright terrifying with those intense looking eyes.

Henri Cash on guitar at just 16 was brilliant with licks and riffs and a rock god presence which was truly fabulous. At this point I had to move to the side of the room as the crowd were going wild in the mosh pit and it was getting painful (for my oldish age!). At the side of this small room with no more than 75 people you could get a good view of the audience going wild with young and old. It was totally exhilarating when band members moved and jumped into the crowd creating a very exciting event. At the end of the set Wilde and Cash left the stage and Cash handed a girl in the audience a guitar so she could finish off the last song which she thoroughly enjoyed.

No dialogue and no encore, just pure rock with attitude. I don’t think I would be exaggerating by saying “I was there at the beginning”. Watch this space! 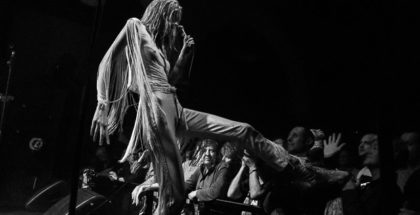