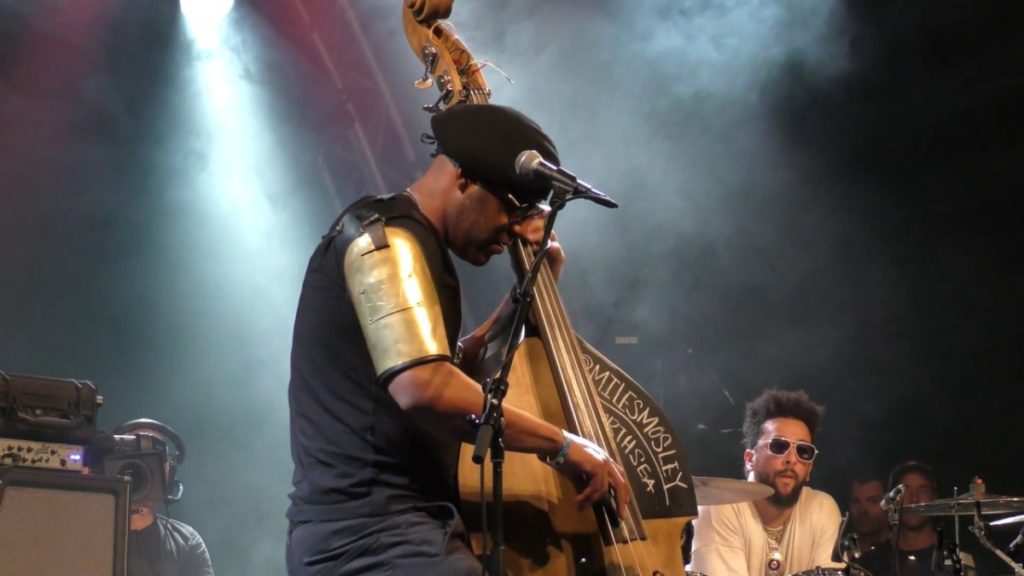 Man, do I love the West Coast Get Down. Whereas some jazz heads think they’re all muscle and lack soul, I see them more as rock stars playing jazz: performers who know how to put on one hell of a show. The man who put the collective on the map, Kamasi Washington, killed it when he came through Berlin at the end of November. That night at YAAM, Kamasi also had Miles Mosley in tow, but tonight the upright bassist and singer is front and centre. Accompanied by two other founders of the West Coast Get Down – Cameron Graves on keys and Tony Austin on drums – plus a horn section (sax and trumpet), Mosley and co. smash out one of the most enjoyable gigs I’ve been to this year.

Donning shades and his trademark shoulder armour and black beret, Mosley looks cool as f**k, and has the swagger and charisma to match. Throughout the night, he delivers little wisecracks and charming anecdotes about the collective and their formative years. Relying heavily on material from his excellent debut album, UPRISING, Berlin’s intimate Ritter Butzke – usually a dingy techno club – is turned into a colourful jazz-funk and soul party. On record, UPRISING sounds intentionally clean and polished, more focused on songs and recreating a classic ’70s funk and soul sound, rather than progressive experimentations. However, in the live environment, these compositions sound rawer and the band are given room to flesh the soul and funk out with supplementing jazz meanderings, all of which are very welcome.

Every band member is given their moment to flex their virtuosic muscles, but naturally it is Mosley and his bass that own the show. Whether dabbling in effects, using a bow or just playing it straight, the sounds he produces are electrifying. To be honest, it’s more rock’n’roll than straight-up jazz, which might explain those Hendrix comparisons. Highlights include ‘Heartbreaking Efforts of Others’, ‘Reap a Soul’ and the euphoric soul of ‘LA Won’t Bring You Down’.

That said, two of the greatest segments of the show involve the other founders. As is customary in West Coast Get Down gigs, other members are offered the spotlight. Tonight, Cameron Graves is given an opportunity to show off a piano-driven cut – ‘Adam & Eve’ – from his excellent album Planetary Prince. In addition, Mosley and drummer Tony Austin do a little showcase of their side-project BFI, a drums and bass duo who use distortion to create a hard-rocking sound. It’s heavy stuff.

The band finish the main set with Miles Mosley’s biggest and greatest single, ‘Abraham’, which of course gets the biggest reception from the audience. Tonight’s show was technically brilliant, both performance-wise and sound-wise. And although we were given plenty of fiery jazz solos, inventive bass effects and general LA showmanship, at the foundation of it all was some truly great tunes, accessible in their simplicity and with truly memorable melodies.

Why Is Music So Important in Online Games?