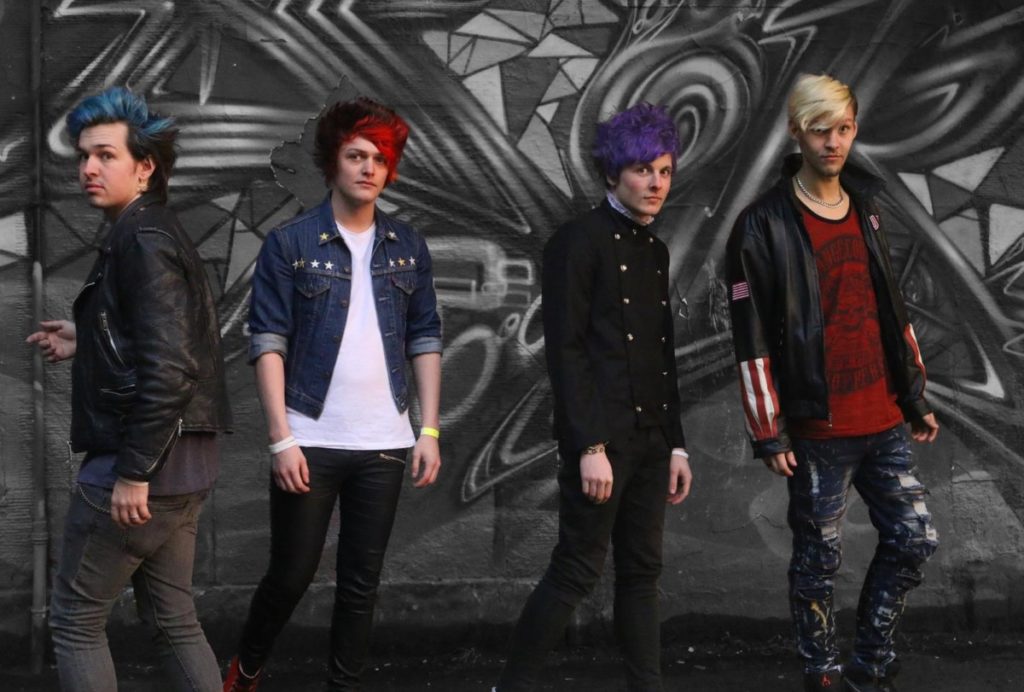 We’re Single By Sunday – a four piece pop band from Glasgow Scotland. We formed mainly because Jonny (lead guitarist) was looking to form a band and at the same time the band that Josh (leader singer) was in was about to split up. Jonny and Josh had actually known each other at school. The story goes that Josh thought he was too cool to speak to Jonny but we prefer the story whereby Jonny was too weird for Josh to speak to.

Jonny knew Jack (bass player) from college and asked him to join the band and last but not least came George, who used to be in another band with Jonny but as Jonny had already left the band he felt at ease asking George to follow suit and join the new outfit. Then hey presto… Single By Sunday was born.

It sounds twee but a general love of music, kind of brought us together. We all sort of grew up in households with strong music histories. George was inspired by his dad’s love of classic eighties rock (he secretly likes big hair and bandanas.) Jack was raised on a staple diet of Prince. Josh grew up listening to a lot of commercial radio stuff and Jonny was raised on a mixture of rap, reggae, pop, R&B and… Barbra Streisand. etc. As a collective we sight the likes of The Smiths, You Me At Six, blink182, Foo Fighters, System Of A Down and even The Specials as influences.

So far we have released three EPs: Get Up Get Out, Atom Bomb and Watch Out World. When it comes to what we are proud of, hmmmm, all of them actually. We reckon that each release has got better and shown another side to us.

Live we are fantastic! We are not a stand around band. We believe in delivering a live and energetic show. It suits some bands to stand and look cool and moody. We think we’re cool but we’re definitely not moody. As a young band we have only jumped onto two tours – supporting other upcoming artists.

Now there’s a question… Our look is very definable as we are each identified by the colour of our hair; red, blue, purple and yellow. Our sound is very melodic: we are undoubtedly pop but with a huge dollop of rock with catchy hooks and irritatingly memorable choruses. We reckon our fans listen to our music because they can relate to not just the subject matters but also the fact that we are fun.

We would all prefer physical as opposed to download and streaming but we can understand why streaming in particular has/is fast becoming the accepted norm. We also get why from the industry’s point of view downloads and streaming is the modern-day ‘physical’ but that said we still believe that there is an authenticity to holding a piece of vinyl in your hands before dropping a needle onto it.

The reality is that what you might spend on one piece of vinyl these days can get you a whole month’s subscription on a streaming site where you can get instant access to thousands of tracks. The likes of Spotify and iTunes are just the digital versions of HMV and Virgin Music Stores.

Josh is still listening to anything that’s being played on mainstream radio; Jack is switching between, Kendrick Lamar and some mad screamo band. George is generally getting his daily fix of Foo Fighters and Jonny is tending to his addiction of The Smiths, Alvvys and Die Antwood… forgive him.

We played four shows at Indie Week 2017 in Toronto, Canada in November. We also have a big headline show at the o2 ABC (mainstage) in Glasgow on 6th January 2018. Our biggest aspirations are to tour, tour and tour. Eventually we’d like to sign a record deal but in the meantime we’ll keep working hard; writing songs, improving our shows and making new friends… like AAA Music.

Questions answered by: Single By Sunday…