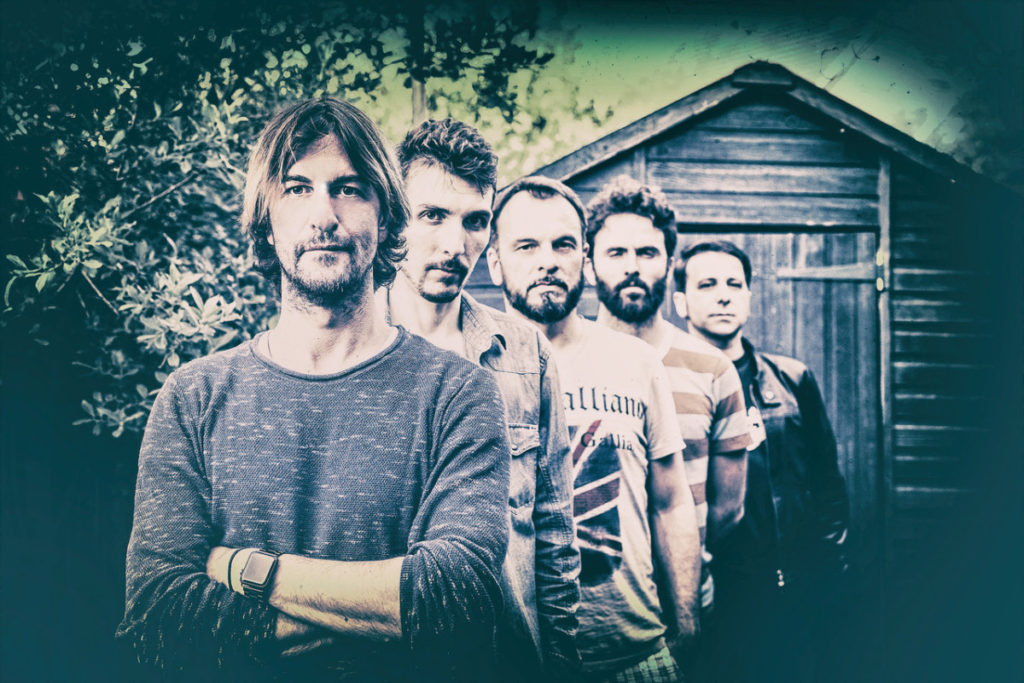 The idea of writing our own music started in Rome 10 years ago. It was me and a friend of mine, Gregorio Pasanisi. We used to goofing around for hours, writing every instrument part, arranging, producing by our own. At a certain point we noticed, lot of people liking our music but, there was no band at that time, just me and him. During that period we met Josh, our current Bass Player, He came over in Rome to record in studio some of our songs, and we became close friends. Not long after that, me and Greg had a divergence of opinions and we decided to end our collaboration, but we’re still good friends. Due to the positives feedbacks we were receiving from abroad, me and Josh decided in 2012 to drop everything and move to London cause we felt it would have been the next step to do, in order to achieve our dreams. It was an exciting time for us, at the same time a hard one, cause we had to start from scratch in a big city as London is. We had to settle down, learn the language, find a job that would have allowed us to develop our music project. The biggest problem was finding the right musicians to fit the project, and it’s been a calvary.

The most difficult moment has been when an A&R of Universal Music UK, wrote us praising the general quality of our music and asking when he could have come to see us playing a live gig. At that time it was just me and Josh, cause we had to find a new drummer and new guitar players. So I had to reply “thanks a lot but at this present time we’re not gigging”. Imagine, our frustration was humongous, but we kept on going, and finally we came across the talented ones that today form Chemical Trails. Enzo Nezi (guitar) Jack Zonato (guitar) Fabio Bizzi (drums). We all come from Italy and we didn’t mean to meet in UK, it just happened – a weird destiny. As soon as we met, we knew they were the right ones, the good vibes couldn’t lie. We are now real friends, I’d say like brothers, sharing this dream together, working hard, looking in the same direction.

We didn’t sit on a chair and decide what type of music we wanted to make. It came out from our inner self. We don’t think too much with our brain but much more with our heart. When a song excite us, and moves something within ourselves then we’re happy. Our background is different, and I deem this is our strength, cause we managed to find a balance in between us, this reflects in our music, cause you can clearly ear many influences, many tastes from 80s 90s. The major ones are Pink Floyd, The Beatles, Radiohead, U2, Depeche Mode, Jeff Buckley, Beck, Oasis, Incubus, Tears for Fears and in general music from 80s and 90s.

We’re about to release an EP on the major music apps like Spotify, Apple Music. We have more songs in our draw, but for the moment we don’t think it’s a good idea release them all. A thing we’re very proud of are the 25k listeners on Number1music and being number 1 in the UK rock chart on Reverbnation (at the moment we’re number 4 Regional and 11 National in UK) with 15k listeners. All this without having yet a proper music video or having done any tour.

We’re also proud to be in the European Final in London the 22nd of April amongst the 12 best emerging acts of Europe. It’s an event in collaboration with 1M Europe, Jar Music Live, Universal Music. We’ve been nominated as best Rock Act and will have a chance to play Primo Maggio Rome, the biggest Italian music festival. We’re also proud of all the messages we receive, especially from the US from fans that constantly support us, showing our love for what we do and how much they love our music. We think this is the biggest reward for an artist.

We haven’t done any tour yet and we haven’t supported any big name (hopefully soon) We’ve been gigging in and around London so far. What are we like live? Live, we’re a lightning bolt ripping time and space so it falls to the ground! We have an intense energy when gigging live, cause it comes from within us, we enjoy firstly our music and when we’re on stage you can tell, we have fun, we love it, we’re hungry.

Nowadays everything in music has been explored, invented…but I’d say our sound is quite personal and unique, due to our different backgrounds but a common link between us, we managed to come up with a sound that is immediately recognisable, and it’s a mixture of 90s and 80s characterised by a fresh airy sound with hints of darkness and spacious guitars. Our fans listen to our music because it speaks to their feelings, you can like or dislike our music but recognise in both cases it has heart. And that’s, in our opinion, the main reason why so many people that came across our music by chance ( cause at the moment we haven’t been touring and we don’t have any official music video, or management or deal with any label) – people love us and are willing to take the time to write us emails showing our love. I have a folder on my laptop with all their messages and it’s a great reading them when I feel down and in need of energy.

We think from one side the digitalisation of music that begun with the creation of Napster has been a disaster for music industry and for the artists in general. Yes, it’s much easier and much less expensive for the final music consumer to access an infinite library of music at a fingertip, but at what costs for the artists? The problem is that no one treat music as a valuable thing. 90% of listeners just download everything in an illegal way, they consume the product not even thinking or being aware of the amount of time, effort, sacrifices, and money, an artist has put in that songs. Not counting the creativity rights. So whereas in the past music labels behave in order to find talents, quality music and helping them developing their career, today music labels are run by managers that only mission is to make as much money as possible, resulting in a homologation of the music, and in a lack of quality.

Unfortunately this is ultimately affecting the final listeners, cause they’re not educated anymore to distinguish in between a quality product and a product created just to sell, but without soul. From this revolution, the only artists that gained and made a bigger profit, were the big names…all the others are literally fighting not to drowning. Nowadays the only source of income for a musician are concerts. Even gigging doesn’t pay anymore, cause 10 years ago, there were a movement of people that loved to go in a venue and discover new music, new acts. Today they only discover new music online and they go to a music gig just to watch those names already pushed on the internet or from mainstream media. It’s an hard time to be a musician. Doesn’t go any better with platforms like Spotify or Apple Music, where the artist is left with a tiny microscopic percentage of the gross, not even being able to survive by that. We think the solutions are different, one could be a strong musicians guild. But if big names don’t act in such sense, It will be impossible. Also, fans wise, make them understand that is just and right to pay for the music you love, especially to support the artists in making that music, cause lot of artists are forced to quit not being able to survive from the proceeds of their art, and this is a shame.

Jack – I’m not listening any contemporary music in particular, noting really catches my taste. My favourite albums are PoP (U2) Lateralus (Tool) Make Yourself (Incubus).

As we said we’re about to release an EP on Apple Music, Spotify etc… We’ll be shooting an official video of our new single yet to be released. We’re working on new songs and we’ll be recording songs we’ve just finished. Hopefully gigging around and get a chance to play at festivals this coming summer. We’re also looking for a manager and a label….if anyone around is interested, drop us a line!