It’s 6:30pm… doors don’t open until 7:30pm… yet there is already a long queue of fans plastered in Frank Turner merchandise from past years. It’s clear that Turner has built up a loyal fanbase considerably since the breakup of his previous punk band Million Dead thirteen years ago, with six albums behind him and Be More Kind released last Friday, the punk folk artist doesn’t show signs of braking.

Frank Turner has described his new album as ‘different to the rest’ revealing that he senses ‘he doesn’t have all that much to add in terms of the country-punk-rock thing’ and that ‘one has to change in life, you’ve got to evolve and move on’. This evolution stems from his period touring across America through the August of 2016 amongst the Hilary and Trump ‘face off’, which he describes as a ‘fractious and feverous time to be in the US’. Frank portrays social media as a ‘machine humanity accidentally created to dehumanise our opponents’ as we cannot directly see who we are talking too, causing arguments in today’s society to become increasingly ‘vicious’. Turner felt the need to respond to this in some way, thereby creating the Be More Kind album.

Frank’s choice of support act deviates from previous tours: Arkells a Canadian Pop band whom Turner describes as ‘intelligent pop’ differ greatly from Irish punk band, Flogging Molly, that Turner has toured with in previous years. However, Turner’s choice is obvious when frontman Max Kerman starts singing out his politically energetic lyrics to a punk-folk crowd, bringing Frank’s lyric, ‘We just need to space to dance’, to life – it only takes a few songs for the crowd to start dancing and singing along with the catchy lyrics. A blend of atmospheric synths construct the interlude after the second song where Kerman speaks exhaustedly: ‘D, G, Am are all you need sometimes… who wants to come up on stage for this next one?’. Commence a series of cheers, a girl pulled up on stage and Arkells continue with their lucky temporary guitarist. In one moment the stage goes quiet and front man Max Kerman speaks out words of inspiration, about following your dreams and being kinder in society – it seems that Frank Turner & The Sleeping Souls are trying to create a culture of ‘kindness’, which can be sensed from the first act. Overall, if you are looking for a pop band with thought-provoking lyrics, then Arkells are your band.

The crowd almost doubles during the anticipation for Frank Turner. Then suddenly the stage lighting transforms the room into a blue lagoon and the room inflates with cheers and screams, expecting Frank to leap onto stage like previous shows, but instead, he diverges, and the voice of Bill Withers’ ‘Lean on Me’ rings through people’s ears as the crowd silences. Withers voice fades and Frank bursts onto stage, contradicting Withers’ mellow voice, with the new single ‘1933’ on his bright white electric guitar, playing the classic Turner composition from his previous works. His next song ‘Make America Great Again’ is described as a ‘song people will like some people will not’ , but ‘there are Trump supporters who come to my shows, and that’s a good thing… we’re all under the same roof singing one song, and that’s a beginning’. As if by magic for one night, the crowd were all singing Turner’s new track despite the politics; people are clearly here for the unique, witty lyrics and liberating the sound of The Sleeping Souls. They are open to his new direction, a clear sign of his loyal following. 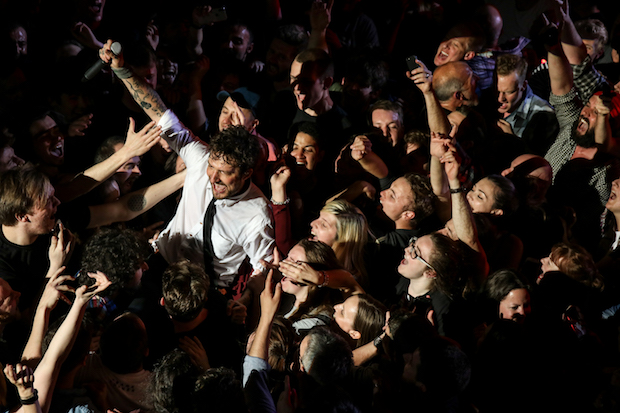 Despite the new album being out, Turner reassures the crowd by proclaiming ‘not everyone wants to hear the new stuff, they want to hear the classics’, as he quickly transitions from Be More Kind to his famous love song ‘The Way I Tend To be’ – the lyrics ‘then I remember you and the way you shine like truth in all you do’ explode from the crowd, and smiling Turner says to talk to a stranger and give them a hug, signifying his new passion for his new direction. The Sleeping Souls exit the stage, as Frank speaks of a charity close to his heart ‘Stay Up Late’ (a charity allowing the disabled to attend shows) which was a nice introduction to his acoustic title track ‘Be More kind’. Sweat dripping from the 36 year old’s face, Frank plays early tracks such as ‘I Am Disappeared’, where the crowd roar when Turner laughs the lyric, ‘Amy worked at a bar in Exeter’. Then comes the classic tracks such as ‘If I Ever Stray’, ‘Reasons Not to be an Idiot’ and Glory Hallelujah’, with the crowd reciting word for word. Guitarist Ben Lloyd and Turner laugh as they sync their guitar jumps, whilst at a wide stance Bassist Tarrant Anderson is also bouncing off the energy that Turner is catalysing from the crowd.

The crowd silence for ‘Song for Josh’ is a gesture of respect for a personal song for Turner, which the audience respects, responding with a respectful applause. The oldest song from the set, a classic acoustic heart-warming ‘Ballad of Me and My Friends’ is followed by newbie ‘Blackout’, where you can start to see Frank’s new influences (The Cure, Radiohead, etc.). However, it is the electric, quick, punk, melodies and lyrics from ‘Out of Breath’ where Turner unleashes the energy building from the crowd below him: developing his famous circle pit, the pit is ruthless and Turner relishes his creation as he relives those punk days for one moment.

Turner concludes his sold out show with ‘Four Simple Words’ where he leaps into the crowd and creates a dance circle amongst the crowd, and finishes with slower rendering ‘Polaroid Picture’, calming the crowd down from the excitement – with arms around each other and hands in the air ,Turner allows the crowd to drift off to sound of the beautifully emotional lyrics of his final song.

Overall, a gig to remember. Frank Turner isn’t just a musician but a showman in his own right – he gives the crowd a great time and not just a musical performance. With the crowd leaving with memories of a great night out, and rushing to get to the merch stand, it is certainly clear to see why he has such a big following, and I am very excited to see what he comes up with next.